Sean Pecora contributed the following. My drum corps experience started with my mother's love of bingo. As a nine-year-old having nothing to do during bingo sessions, I began to volunteer to help out any way I could. Working for only a piece of pizza and a soda, I became a food runner. I would go out of my way to look at the hundreds of trophies that were in the bingo hall. I remember not having a clue about the uniformed people were in the pictures. One night, a man named Greg Orwoll was selling bingo packets. He pulled my mother and me aside and talk to us about the Colts. He then began to talk about the Colt Cadets and how their program worked. I was interested, but at the time, I was scared knowing that I would be gone from home did not sit well with me. In 2001, my mother accepted Greg's offer and enrolled me in the Colt Cadets. 2001 was a tough year as the corps had only 17 members before I came along. My first rehearsal was interesting because when Greg asked me what I would like to play, I replied, "clarinet." He then explained the instrumentation and convinced me to be a baritone player. When I get to the first rehearsal, I had no clue what to expect. I was greeted with open arms and taken aside by a Colts horn player so I could be taught the basics of playing. After about an hour of explanations, I was finally able to produce some sort of "sound" out of my horn. I wasn't taught everything all at once. One time I put my horn down on the ground, and I put it on its bell. A loud "NO, DON'T DO THAT" and my quick reflexes resulted in me grabbing the tuning slide which I had no idea would move. It moved and I was scared that I broke the thing. I just stood in shock while all the others also just stood there with "that look" on their faces. Colt Cadets director Vicki Shaffer and I learned how to unbend a tuning slide after that. Anyone who has marched in a drum corps knows the awkward moment when everyone simultaneously has the same thought on their mind and the unison sound of "ooooo" comes out of their mouths. I was deeply embarrassed after that. We made plaster figurines in eighth grade art class. While others made theirs of sports players, mine was of a Colt Cadets baritone player. When the project was finished, I packed it in to a shoebox and headed over to the Colts' corps hall. My intention was to give it to Vicki Shaffer who had let me experience the greatness of drum corps. If it wasn't for Vicki, I honestly don't know what I would have done. Vicki went out of her way to come pick me up to go to rehearsals and tried to help me learn to play the baritone. She taught me to strive for the best in myself and she never allowed me to give up. I grew to have a better understanding of myself and I even learned to believe in myself. The statue was merely a thank-you. I moved to Green Bay, Wis. when I was 15, but couldn't afford to march with a drum corps. I didn't think I was good enough to try out for Americanos who were only 30 miles down the road. Instead, I enrolled in my school band and learned how to play tuba. I took the entire summer off and kept a tuba at home to practice for my move to the Americanos. One day during my sophomore year of high school, Dave Salveson of the Americanos came to speak to my band. I had never been so excited. As we watched the 2002 show of the corps, I was sure I was the only one who was paying attention. When the clipboard came around, I proudly signed my name. I was finally going to be an Americano for the 2004 season. When the Americanos went inactive in 2005, I decided to browse through corps Web sites, looking for a small corps to march with. I didn't feel ready to march with Colts yet, but I stumbled across East Coast Jazz's site and made an inquiry via e-mail. That night I got a call from assistant director Fred Ford. That night I had six e-mails from staff and members. I was hooked and managed to convince one of the Americanos trumpet players to join the corps with me. I am grateful that Fred allowed me to be a part of the group that year. I was able to reunite with my great aunt in Connecticut and I was able to see a lot of things that I had seen when I lived out there as a toddler. 2006 found me back with Colts organization. I was finally a Colt. Walking off the field after our World Championship Semifinals performance in Madison, Wis., I couldn't help but say goodbye to Camp Randall Stadium. Various reasons made it difficult to march this season, and even if I don't march again, I have learned so much from the activity. I won a World Championship with East Coast Jazz and only recently have been able to comprehend what it means. 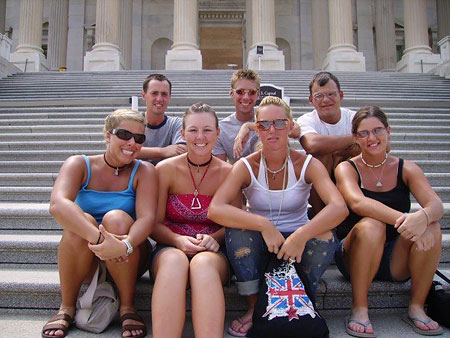 Colts horn line members on the U.S. Capitol steps in Washington DC in 2006.
Sean Pecora is to the right in the back row.
The organizations I've been with are much more than businesses – they are extended families. I thank them all and I thank all the people who helped me for their care and teaching. Every year has taught me so much. For every up there was a down, and for every down there was someone there to help me push forward. I have had difficulties during my time marching, but with my corps experiences I have learned not to dwell in regret, to make the best of every inconvenience, and to learn from everything I do. So think of this quote by the Colts' brass caption head Jason Buckingham: "Do not be afraid of failure, you have nothing to loose and everything to gain." To anyone who is reading this, please help a corps when you can. No one really knows how hard it is for a corps member or a volunteer when they are on the road. Giving only a few hours of your time greatly impacts how a drum corps gets down the road. Just imagine if you were the only person to make enough food for 70-plus people. Then think about how nice it would be if there were others to help.
Editorial assistance by Michael Boo. Fanfare archives