Think a championship-winning corps director has it easy in the days and weeks following the announcement of scores? Think he or she slips off to Aruba to relax and decompress? Think again! Here, Dave Gibbs of the Blue Devils fills us in on his busy month of August. 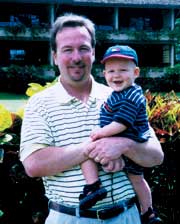 Dave and Peyton Gibbs
"I actually stayed in Orlando with my wife, Sherrie, son, Peyton, and daughter, Ainsley, on Sunday and Monday after finals. It was fun to have Peyton around during finals week. He got a kick being on the field for the announcement of scores. Then when I got back to California on Tuesday, it was back to the office to start cleaning up all the loose ends from the summer. Paying bills, getting vehicles home and put away, inventorying equipment. I had to answer a lot of correspondence and e-mail. Merchandise sales the last couple of weeks have been great, so we had a lot of work to do filling all the orders. "We are corresponding with the members about the banquet, yearbooks and of course their championship rings. We will have our banquet on the Thanksgiving weekend where they will receive their rings, yearbooks and the "Inside The Blue Devils" DVD. "We have been working the past year on the 2004 season. But when you get home, you have to get things moving quickly. Applicant letters for the new season are flooding in. We are corresponding with all applicants and setting up all of our auditions in November and December. "Staffing and show production schedules will being worked on for the A
Corps. The winter guards and DWS are starting their season. The Blue Devils' fund-raising effort will be in high gear in September through the end of the year. "There are schedules and tours to work on. Camp and rehearsal schedules are being finalized. 45 members will be going to Japan in October. We will have a corporate gig where we will take 16 guard members to Atlanta in October. "And ... we are working on putting the final pieces together for a European tour in June and July of 2004. I will be traveling over to Europe in September and then with the corps to Japan in October, and I'll be at DCI meetings in September. "Basically, this is not to much different than any other season. Things do not slow down -- in fact, until the middle of October, there is not much time off."