By Allison Owen This past weekend was my second Carolina Crown camp. The camp location was the large and very nice South Pointe High School. As expected, I had a great time and met even more people. If I had to choose I think this camp was even better than the first.
Friday night was the 2005 banquet, which I had the privilege to attend. It was a night full of fun and reminiscing about the 2005 season. Everyone -- vets and new members -- gathered in the auditorium for awards and a preview of the tour DVD. This really gave me the chance to see what kind of a family oriented organization Carolina Crown is and how great it must be to have a part in this drum corps. 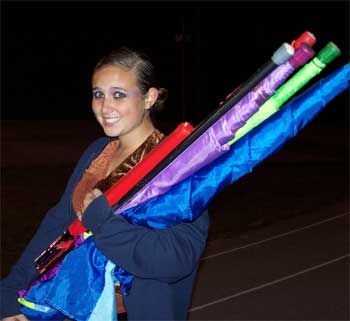 Allison Owen
By the time the awards and such had ended there was only about an hour left for rehearsal, so the guard brought in all the equipment and had a short meeting about the schedule for the weekend. Saturday morning we were ready to begin some real rehearsal time. After stretching we did a lot of basics and learned some exercises on flag. We also learned a short routine for "show and tell" full of 45 tosses and neat tricks. Upon learning this routine I realized how far I have come in the past two years. I could barely do a 45 toss two years ago and now I can do all sorts of crazy tosses and learn new ones with a bit more ease. After lunch the weapon auditionees left to learn technique and such, while those of us staying on flag worked on cleaning the "show and tell" routine some more. We also worked on exercises some more and learned some new tosses. I definitely figured out some new things to work on for April. During the evening block we worked on a little more flag and then began some Jenn House dance class. We learned a combination and worked on that for quite a while. Jenn's technique is a combination of many different styles and because of that I learned new things to work on for April. Once we were a bit more comfortable with the combination we performed the dance and flag routine in small groups. The rifles did a routine for us as well. It was pretty cool to watch each other perform even though it was getting to be late at night. Sunday morning we had a longer dance session, stretching out a lot and working on across the floors. We then worked on the combination some more and reviewed basics and the other routines. We were split into groups for "show and tell" and then performed for each other in these groups before having our wrap-up meeting. "Show and tell" went really well and it was pretty fun. I should mention that this was my first "show and tell." Somehow I don't think I've ever been in a "show and tell" after my two previous years of drum corps. In 2004 my flight was always in the afternoon so I had to leave a little early and then in 2005 I just didn't have "show and tell." So considering the circumstances I think my first "show and tell" was pretty good. When the horn line played we got to sit in the middle of the arc. That is probably one of the coolest things I could ever be a part of. Getting to sit in the middle of all that sound is simply phenomenal. I don't think my drum corps experience could ever be complete without an event like that. If you ever get the opportunity to sit in front of the arc of an amazing horn line, do it. It is one of the greatest experiences ever. Overall I again had a wonderful time. April is a long time from now, but I'm sure it will be here before I know it. I know what I need to work on to improve for then and I will most definitely be working hard in the coming months to prepare myself. Now that I've experienced being at Carolina Crown I don't ever want to do anything else. It is simply amazing and I can't imagine anything better. This is my dream and I'm going to do everything I can to make it come true. Congratulations to those who have been called back or received a spot at your drum corps of choice. This is truly an amazing activity and I feel extremely blessed to be a part of it. If you haven't received a spot or been called back, do not give up! There are tons of great drum corps out there and if you work hard enough you will achieve your goals. I don't know what the future holds for anyone -- including myself -- but I'm certainly not about to just let whatever happen. I'm going to make 2006 the great year it's shaping up to be and you should too! Allison Owen, 17, is a senior at Sullivan Central High School in Blountville, Tenn. She was assistant conductor at Southwind, and she enjoys dancing, performing, color guard, writing, English, and having fun. She plans on attending Western Carolina University next fall...