Each weekday before the DCI 2005 Classic Countdown, we'll be running first-person accounts of the seasons and the shows that will be featured in that event. Here's the 10th installment: By Matthew Tye Being a part of Star of Indiana was an amazing experience, but the blessing of being a part of the 1991 corps was a surreal experience. It seemed as though the instructional staff was all at the tops of its collective game. Donnie VanDoren, Jim Prime Jr., Bob Dubinski, Thom Hannum, Todd Ryan, and the unparalleled genius of George Zingali all made it a dream season. 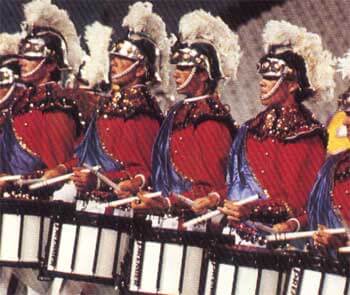 Star of Indiana in 1991.
Then we started to work, and work, and work some more. The season brought us members to a level of commitment that I never thought possible. Even though we never really spoke of it, everyone seemed to be on a mission to win from the very beginning. We focused so much on the product, and so much on perfection, that sometimes we went too far, and it seemed to fall a little flat. Amazingly enough, we always seemed to bounce back, and spur one another on to be better.

The one memory of 1991 Star of Indiana that I hold so dear comes from George Zingali's famous "cross-to-cross" from the final 30 seconds of the show. Throughout the season we had three or four endings to the show, and yet none of them were right. We were at Boston University, and George told us that we were going to change the ending -- again! We were on the practice field, and George told us to go to the first cross (from the old drill). From this point on there are many different recollections, but this is how I remember it. Once we were set in the first cross, George broke us up into small groups of six to 10 people each. He started sending people in various directions. He was designing the drill in his mind's eye, and telling us where to go in order to accomplish his vision. At times, he even told some of us to go from point A to point B in 16 counts, and however we saw fit to get there was OK with him. George spent half the night working on this with us. The first time we ran it at rehearsal, the staff people who were left in the stands went wild. The reaction was amazing, and I can still remember the look on his face when he saw it happen for the first time during that rehearsal. He was so happy, and so tired, but he refused to give up. He didn't work hard for the vision, he worked hard for the kids down on the field because he wanted for us to have the best. The first time we performed the cross-to-cross was the next night at a show in Lynn, Mass. To say the least it was ugly. The field was wet, and we must have had a dozen or more collisions/falls before the dust settled. I was involved in an enormous collision with fellow contra bass Ray Linkous. I marched off the field with blood running down my face, as did many. Even with all of the crashes and mayhem, the crowd still loved it, and so did the judges. We spent a great deal of the rest of the season refining it, cleaning it, and making it viable. When all was said and done, I believe that George created his greatest masterpiece that night. There will never be another like him.

Finals week found us on the football field at the University of Texas at Arlington (I think). We were very short on room, so many of us had to sleep in the press box. We spent the majority of the time working on the final cross-to-cross move, and cleaning the show within an inch of its life. The weather was relentless. Hot, hotter, blazing. A few of us spent an evening in the press box, dangling a huge stuffed Dino doll out the highest window of the box to entertain ourselves. I remember getting dressed prior to those last few shows with the stereo playing "Roam" by the B-52's (the show was "Roman Images -- get it?).

Anyone who was ever involved with the Star of Indiana was a part of something wonderful. Take away all of the arguments, and the myths, and we were just a bunch of kids, being led by a wonderful staff, who achieved the impossible. May the Star shine brightly again one day.