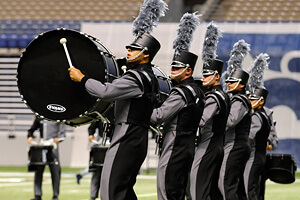 Revolution
Three corps broke 90 points for the first time this season as the Drum Corps International Tour took a breather from temperatures breaking 90 and 100-degrees across the country inside the air conditioned Alamodome in San Antonio, Texas. Texas' three Open Class corps served as the opening act to the annual DCI Southwestern Championship on Saturday, July 23, that this year featured a lineup of 22 of 23 of DCI's World Class corps. Only Jersey Surf did not make the trip to the Lone Star State for this major regional event. In competition among the Open Class groups, it was Revolution that took first place in front of its hometown crowd with a score of 75.20. The Alamodome performance was a homecoming for the San Antonio-based corps after spending much of the early part of the 2011 season touring the Pacific region. "It's always great to come back and to perform in front of all of our family and folks who get to see the changes and modifications that we've made to our program," said Revolution Executive Director Johnny Rodriguez. "We've already performed in some big venues this season like Mile High, Stanford Stadium and the University of Utah, and even though the Alamodome isn't quite as big, the fact that it's home turf is exciting in its own right."

Genesis
Also from Texas, Genesis of Edinburg finished in second place with a score of 71.00, and Forte of Grand Prairie finished in third with a 67.35. As they've been doing at every competition since June 19, the Cavaliers topped the field of World Class corps, scoring 91.05 to the Blue Devils' 90.95 for first place. "Tonight was amazing, and it was our best show yet," said Cavaliers color guard member Lynel Curd. "We were really proud when we got off the field." This is the narrowest margin of victory yet for the Cavaliers who were separated by just a tenth of a point from the second-place Blue Devils, and 0.65 from the Cadets (3rd, 90.40). Carolina Crown scored 89.55 at the Alamodome to take fourth place. "It's obviously a four corps race [for first place]," said Cadets Director George Hopkins. "From our standpoint as I describe the competition to [our members], it's like climbing a wall. You just keep climbing it every day. You get out there every day and work as hard as you can." 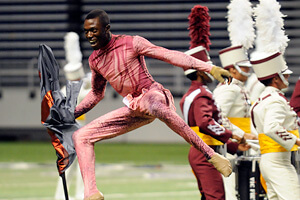 The Cadets
The Southwestern Championship was the first time this season that corps have been officially timed, with penalties assessed if a corps goes over the mark. Hopkins says he was uptight during the performance as the Cadets clocked in at four minutes 57 seconds for the allotted five minutes of pre-show warm-up and at 11:25 for the 11:30 given for the competitive performance. "We've got to fix that in the coming days," said Hopkins. "We just keep adding stuff to the show, that's our problem." With its 2011 production "Juliet," Phantom Regiment (5th, 87.40) continues to hold a lead over the Bluecoats (6th, 86.60) and Santa Clara Vanguard (7th, 86.15). Regiment Program Director Dan Farrell was pleased with what he saw from his corps in San Antonio. "We talked to the corps members during rehearsals a lot about the emotional moments [of our production] and not to worry too much about the details," he said. "I thought they did a really good job." In the last week the Boston Crusaders have made a move on the Madison Scouts, outscoring the Wisconsin corps for the first time this season on Thursday in Denton, Texas. 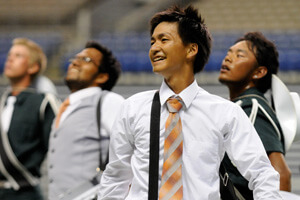 Madison Scouts
In San Antonio, Boston took eighth place over Madison, with scores of 84.55 and 83.80 respectively. Even after the 0.20-point penalty that Madison was assessed for running overtime, both scores for these corps were season-bests. In a tie for 10th place at the Southwestern Championship, Blue Knights and Blue Stars both finished with a score of 82.90. The fight for a spot in the top 12 continues to be an extremely tight and exciting race. Spirit of Atlanta took 12th in San Antonio with a 79.05, but the Glassmen (13th, 78.60) and Troopers (14th, 78.55) are both within a half a point. It's been a competitive roller coaster for these three corps, splitting top finishes with each other several times throughout the month of July. Just a few days ago, the Troopers found themselves as many as 1.45 points ahead of Spirit in Denton, Texas. "Everyone thinks that we're just fighting for the 12th spot," said third-year Troopers baritone player Alex Lackey. "But we're trying to take the next step, and hopefully tonight helped with such a good performance. Yes, we're trying to get into Finals, but we're also trying to push for more." 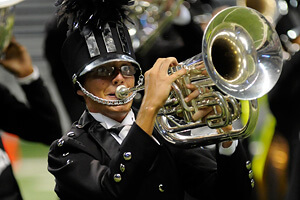 The Academy
Lackey called the Troopers' performance in San Antonio "magical," referring to what show designer William Chumley expressed to the corps after they came off the turf at the Alamodome. After a nearly two week hiatus from competition before making their way to Texas this week, Academy members are also looking to prove themselves against many corps that they have yet to face this season. With a 77.75 and a 15th place finish on Saturday, the corps also looks poised to enter the fight for the top 12, finishing 1.3 points behind the 12th place score. Colts (16th, 76.55) and San Antonio's own Crossmen (17th, 75.80) continue to score closely to one another. Though the Colts have finished ahead except for the two corps' very first meeting in Bowling Green, Ohio on July 8, they've never been apart more than 0.75 points all season. Like the Academy, Pacific Crest has also stayed close to home up until this southwestern swing of the Drum Corps International Tour. In San Antonio the group took 18th place overall with a score of 73.30. Crest snare drummer Ryland Schell says that the corps' San Antonio performance was "a true testament to how hard we've been working. 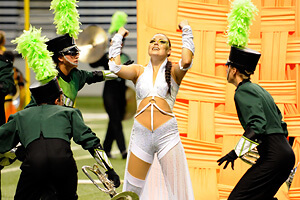 Cascades
"We don't get to see too [much of the competition] because we're in SoCal for so long, but once we make our way out here it's all about us coming in with confidence," Schell said. "If you worry about [what other corps are doing] it throws you off your game, so we've got to be confident about ourselves. And right now we have that member confidence and trust between each other." Rounding out the final placements were Teal Sound (19th, 70.65), Mandarins (20th, 70.45), Cascades (21st, 68.45), and Pioneer (22nd, 66.00). World Class corps will stick to the southern region this week with events scheduled in Texas, Oklahoma, Louisiana, Oklahoma, Mississippi, Arkansas, Alabama and Tennessee, before the biggest event of the season outside of the World Championships on Saturday, July 30 at the Georgia Dome in Atlanta. The Atlanta event will be the first and only time this season that all 23 World Class corps will go head-to-head at a single show before the World Championship Prelims on Aug. 11. View a recap of scores from San Antonio. Buy tickets to upcoming DCI Tour events. View the complete 2011 DCI Tour schedule.