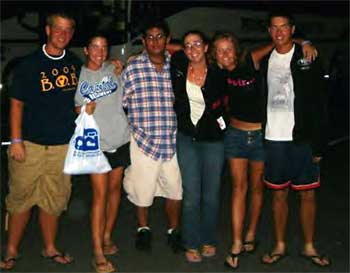 Robyn Marshall, who marched baritone at Capital Regiment (and was a rookie this year), sent in this one. "This is a picture of my out-of-corps friends that I met online before I marched. Four, actually five, (the fifth person, Yvette, wanted to march Troopers but complications arose and she didn't, but we still love her!) of us originally met on an online band forum. "We talked for a while, and soon that talking online moved to us talking on the phone. Lee was the only one of us who had corps experience, but all of us were really into it. Soon, my soon-to-be boyfriend Hector found a picture I had of Santa Clara Vanguard on my livejournal, and we decided to talk, and he ended up being included into our circle. "Then, for some reason we all decided to join this "xanga" thing, and that is where we found Nathan. From then on, we would have nightly chats on AIM with dumb names, and talked on the phone for hours about drum corps. We FINALLY all met up on semifinals night. Although Yvette could not be there, we got her a consolation prize of her favorite corps shirt. "It was an awesome night, to finally be with all the people who kept influencing me to do corps. It is such an odd way of meeting when I think back on it, but these are the people that everyone tells you that you come back to drum corps for. From left to right: Nathan (Glassmen mellophone), me (Capital Regiment baritone), Hector (Bluecoats euphonium), Sam (Colts mellophone), Michelle (the Magic mellophone) and Lee (Bluecoats euphonium, also Michelle's boyfriend)." Thanks Robyn! E-mail your best shots from the summer to dave@dci.org along with where and when the photo was taken. Send some biographical information about yourself as well. We'll give you full credit. Also, let us know if you want your e-mail address included.