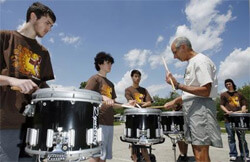 RRStar.com
Phantom Regiment kicked off the OnQ National Drumming Camp series this past weekend at Rockford College in Rockford, Ill. OnQ is the performance education division of Drum Corps International. The Rockford Register Star was there to cover the live learning event, interviewing students who had traveled from as far as South Dakota and New Mexico to learn from acclaimed Phantom Regiment instructors, including Paul Rennick and Marty Hurley. Read more and see a photo gallery at RRStar.com These other OnQ National Drumming Camp events are scheduled to take place this month at select locations across the country:

Blue Devils with instructors Scott Johnson, Pete Sapadin, Ben Maughmer and Tim Tintari June 28 – 29, Yucaipa High School, Yucaipa, CA In addition to getting the chance to hone their chops with some of the drum corps activity's greatest instructors, camp students have the chance to throw down the beats alongside the members of those respective corps' world-class drum lines. Learn more at OnQ.org.