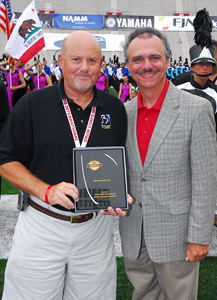 Rick Odello (L) with David Eddleman.
During the conclusion of the 2008 Drum Corps International World Championships, Blue Devils B director Rick Odello, received the award for Open Class Director of the Year. The award is determined by all Open Class directors and is voted on just prior to the start of the week of the World Championships. "I've only known Rick really close over the last couple of years since I've been working as the Open Class Coordinator, and in that short time, I've found that he is just a really genuine human being," said David Eddleman about Odello's Director of the Year credit. "Rick is one of the most honorable guys in our business, and he's always available and willing to lend a helping hand. If you need something, you can count on Rick." Modest about the recognition, Odello said after receiving the award in front of a crowd of thousands at the Open Class awards ceremony, "It's a very humbling to be recognized in any position by your peers. I respect them all greatly, so I'm very proud to have obtained this honor. It's very, very exciting." Odello, who is the current director of both the Blue Devils B and C corps, was also recognized during the 2008 World Championships for his induction into the DCI Hall of Fame. Learn more about Odello in the DCI Hall of Fame. Photo by Jolesch Photography.