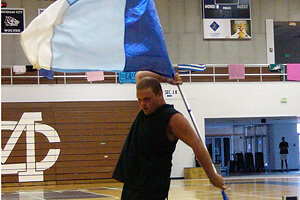 Spartans' Jason Danley
It was a year of firsts for DCI's Individual and Ensemble Competition (I&E) this season. Not only were the venues split between two dates and states, but the World and Open Class competitors retained their own forums. The World Class competed in San Antonio back in July over the course of two days, while the Open Class corps competed Wednesday, Aug. 11 at Michigan City High School in Indiana. For the first time, all ensemble groups were mixed in one room including the Brass Ensemble category. For the first time, there were more keyboard entries than snare, and no cymbal ensembles. And it was the first time many corps earned I&E gold in their DCI histories. With Open Class corps competing exclusively with other Open Class corps, this 'golden' opportunity created more winners in each category with more chances to spread the wealth. In the Keyboard category, Oregon Crusaders' Leila Hawana took top honors with a score of 95. Music City captured Percussion Ensemble gold. And Blue Devils B's Chris Drummer won Multi-Tenors. Kicking off the evening were Taylor Durey and Derek Laughlin, both 18 years old, with an impressive six years in the Colt Cadets performing as an Auxiliary Ensemble in the Color Guard venue. Using the music of "Breakfast at Tiffany's," the duo utilized all three pieces of equipment – flag, saber, and rifle. In the glow of post show, Taylor had advice for anyone thinking of entering I&E next year: "Start early, make sure you write what you need, and practice, practice, practice." She then quickly added, "Don't be afraid of your audience." The highest scoring individual of the evening was Blue Devils B member Olivia Hansen, 16, with a near-perfect 99 in Auxiliary. Hansen, who has been with the Blue Devils organization for the last 10 years, performed to Oona's "Tore My Heart." 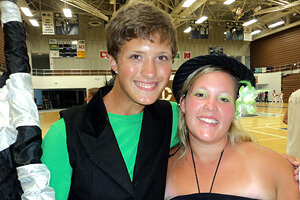 Colt Cadets Auxiliary Ensemble
Other BDB winners included their Mixed Ensemble comprised of one of the more eclectic combos ever assembled on an I&E stage: saxophone, trumpet, drum set, keyboard, and bass guitar. The most popular room by sheer body-to-space ratio was Percussion. Packed to the nines, Blue Devils B snare drummers Chris Bright and Brandon Gedalje went head-to-head, taking gold and silver respectively. Bright, 18, who won the individual snare competition at the Percussive Arts Society's International Convention in 2008, said, "I didn't feel like I was actually playing – I was just feeling the moment 'cause the crowd was really into it." Comedy could be found throughout including the always-humorous Bass Drum competition. The winners from Oregon Crusaders were as deft with their split parts as they were with their visual humor and anecdotes. Equally clever was Axel Fargerbert from Sweden's only active drum and bugle corps, Str?¤ngn?¤s. Fargerbert tied with Blue Devils B's Anthony Feldt for the Multi-Percussion title. While Feldt used a room full of percussion instrumentation, from drum set to rack, Fargerbert went the other extreme assembling a micro collection of shakers and toiletries. The production went through the morning ritual of brushing and shaving all the while providing an intricate background of sound effects to his procedures. 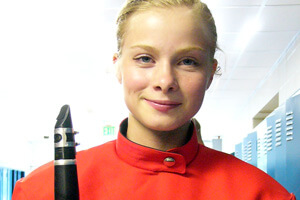 Str?¤ngn?¤s' Malin Sjourist
In the Woodwind category, the Saxophone gold medal went to Betsy Guthrie of Colt Cadets. Blue Devils B flutist Ruben Garcia, 17, performed "Romance" by G. Brun. Kyle. And Malin Sjourist from Str?¤ngn?¤s played Bach's "Symphonica" on clarinet. While there is currently no Vocal category, 7th Regiment was inspired to enter a barbershop quartet in exhibition. The men included Sean Rahusen (tenor) 15, Brendon Rebello (lead) 17, Jamil Jorge (bass) 19, and Joe Walczyk (baritone) 15, who sang "Hello Marylou" made famous by Buddy Holly and arranged by Joe Liles. The group was formed by brass staffer Steve Wolf. "I'm a barbershopper myself," said Wolf, "and we had so many good musicians that I thought why not start a vocal caption for I&E? So these guys sang in exhibition today." Plans don't stop there, however. "When the season is over, they are going to compete in the Barbershop Harmony Society competition – they have a competitive circuit every bit as competitive as DCI," he explained. "And next year hopefully there will be a vocal caption so we can compete rather than just perform in exhibition." Though not able to compete in the World Championships this year, Impulse sent a contingent of performers from Southern California to I&E this year including Chase Kellis (snare), Oscar Hernandez (snare), and Sammy Trejo (multi-tenor). The young men had never performed in I&E before, and not only wanted the experience, but the opportunity to see champions up close. "I was really nervous," confided Trejo after his moment in front of the judge playing a piece called "My Name is Raul." "Even when I got off the stage then came back in, my knees were a little shaky still, but I had fun." He advises new performers to be brave. "The first time may not go as you want, but as long as you have the desire, just go for it. Don't give up." 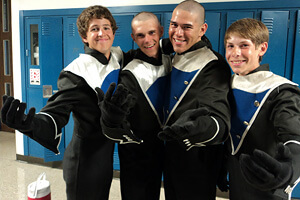 7th Regiment's barbershop quartet
Blue Saints, always supportive of the educational experience, entered three groups in the Percussion Ensembles. Perhaps the most amusing featured center snare Ben Ripley, 20, with 11 years under his belt, and rookie James Isaacs, 16, performing a piece called "Slinky." Fearless, these two performed on both instruments and climbed on chairs to create daring feats of percussive prowess. Second year veteran member Kyle Peterson, 17, of Oregon Crusaders won on French Horn performing the Allegro from Mozart's 3rd Concerto. On trombone, Lily Brondyke of Colt Cadets beat out Bobby Langan of 7th Regiment for gold. Langan, a biochemist, received his silver performing Guilmant's "Morceau Symphonique." The two low horn categories, tuba and baritone, went to Racine Scouts' Robert Cantu and Conner Heinle. Looking at the numbers in total there were ninety-six entries in twenty-four categories from 14 corps, with 196 participants in four venues. Blue Devils B took home the most gold with six, followed by four each to Colt Cadets and Oregon Crusaders, three for Str?¤ngn?¤s, two for Racine Scouts on low horns, and one each for Music City, 7th Regiment, Spartans, Revolution, and Velvet Knights.