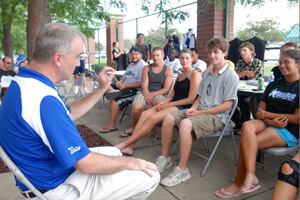 DCI Executive Director Dan Acheson with drum majors
Michigan City, Ind., site of some 50 years of drum corps competitions, hosted the Drum Corps International World Championship Opening Ceremonies Monday. The event not only recognized the 2010 Open Class drum majors and performing corps, it also marked the official start of the season's final contests. Before the start of the ceremony, drum majors and their directors had the rare chance to relax, interacting with DCI Executive Director Dan Acheson and corps directors. DCI Hall of Fame member Gene Monterastelli, who helped organize the drum major reception, said the event allowed the Open Class leaders to "have something to eat, talk, get away from everything else and just have fun in each other's company." Instead of worrying about scores and placements, they could interact with fellow corps members on the same level, off the field and without uniforms. 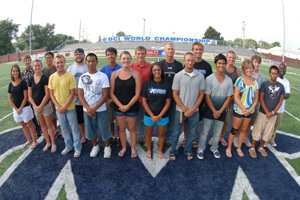 2010 Open Class drum majors
At 6 p.m., drum majors donned uniforms and headed to Ames Field, where Michigan City Mayor Charles Oberlie welcomed the corps to a supportive audience. "It's a reflection of the pride we have in our community that we're very proud to have the young people come here to show their talent," Oberlie said. "I believe that you'll find an educated audience that respects the young people and their performances, and understands the work that's gone into getting here. It's the chance to see how well the [Open Class corps] have advanced in their quest to have that perfect performance." On the field, the Michigan City High School band performed the national anthems of the United States and Canada. And to recognize the international corps Str?¤ngn?¤s, Racine Scouts Corps Manager Andrea Birbilis sang the Swedish National Anthem. Following the introduction, drum majors of the 16 Open Class corps performing in Tuesday's Quarterfinals lined up at the front sideline for the official drum major recognition. 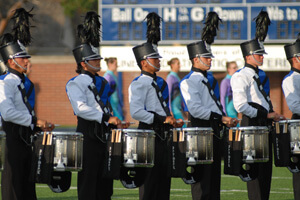 Blue Devils B snare line
The Blue Devils B, as winners of last year's Open Class Quarterfinals in Michigan City, put on a standstill performance of their 2010 program, "Space." "This is the first time we've ever done [the Opening Ceremonies], but it was really fun," said Drum Major Eddie Pineda. "The standstill was great. You could just feel the members performing full out like we do at practice, and the crowd really felt that." On Tuesday, August 10, corps will perform in the Quarterfinals competition at Ames Field in Michigan City, where current leaders Blue Devils B will try to fend off Oregon Crusaders, Revolution, and 13 others in the title for Open Class Champion. The week continues Wednesday, August 11 with the Open Class Individual and Ensemble competition at Michigan City High School before all 16 corps head to Indianapolis for the Open Class Semifinals on Friday, August 13 at Lucas Oil Stadium. View a photo gallery from this event. Check out the complete Open Class Quarterfinals lineup. Contributing to this report: Ryan Cain, Johnny Gilbert