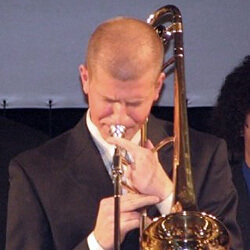 Jon Lacy
Jon Lacy, 19 University of the Arts Jersey Surf Baritone, 2008-2010 How did you choose your corps? I was introduced to drum corps through my high school band director who worked with the Crossmen a few years back and wanted to get to know more. Jersey Surf was the closest group to me so I decided to check the activity out. Before I knew it, I was in love with the family I was about to spend the summer of my life with. Now I can't stop "sharin' the love" and find myself coming back year after year! What was the experience like the first time you auditioned for a corps? I was 16 when I first auditioned for Jersey Surf and the experience was fairly typical, but nevertheless intimidating. I was in a large room with more than a hundred other brass players and one by one we were pulled into a room to play several exercises in front of the caption head and a few music techs. I can remember being nervous and self-conscious about what they were going to think about my playing. But I had been through plenty of auditions before, and I knew that they only wanted me to succeed. I played exactly how I knew I could and everything went just fine. In a way, drum corps was one of the pivotal points in my musical career where I learned to control my nerves and channel them into something productive. What's the best way to prepare for an audition? "Opportunity favors the prepared mind." My best advice for any audition, especially a corps audition, is to know exactly what's going to be asked of you. Question the instructional staff and past members about what to expect and get the clearest picture of the situation. That way you can walk in, play what you've prepared, and worry only about what you already knew was coming. The less surprises the better. What would you say to someone who is unsure whether or not to audition for a drum corps? You have the rest of your life to work, and only until you're 22 to march in a junior drum corps. If you've never marched before, trust me when I say it's going to be the most rewarding experience of your life. If you have marched before then it's really a no-brainer, just take a moment to really think about the decision. Where to march is more complicated and a personal choice, but wherever you end up, march until you're ineligible to do so. Any other advice? At Surf (and at most corps I presume) one of the things we stress beyond learning our show to the best of our ability is to "share the love" with the outside world. Whether it's at a show, at our high school/college marching programs in the fall, or with other members during tour, our goal is to make marching in a world-class drum corps the best possible experience anyone could imagine. After all, what would drum corps be like if you're going to spend three months with 150 other people you can't stand, performing a show that isn't enjoyable? So "share the love" and the experience will be that much more rewarding. Learn more about corps audition dates, locations and additional info.