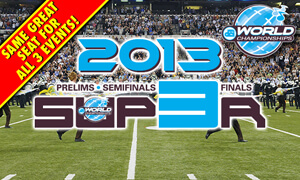 The 2013 Drum Corps International World Championships will return to Indianapolis in August of 2013, and less than a week remains to order ticket packages to DCI's biggest event series of the year.

2013 will mark the fifth anniversary of World Championship events at Lucas Oil Stadium, and DCI's Super 3 ticket packages will put you in some of the best seats in the house for all of the exciting action taking place in downtown Indianapolis.

Super 3 packages will include reserved tickets to all three World Championship events at Lucas Oil Stadium:

ACT TODAY: Super 3 orders must be processed through the mail, and your order must be postmarked by Tuesday, Oct. 30.