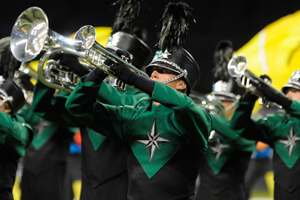 Oregon Crusaders perform in Lucas Oil Stadium
at the 2012 DCI World Championship Semifinals.
During a meeting this past weekend in Indianapolis, the voting membership of Drum Corps International unanimously approved the Portland-based Oregon Crusaders as a World Class corps effective with the 2013 season. Founded in its latest incarnation in 1999 as the Southern Oregon Crusaders, the corps relocated to Portland several years later where it adopted its current name. In 2004, Oregon Crusaders won the Division III title in their very first trip to the DCI World Championships, and this past August they captured the gold medal in Open Class competition after an undefeated season on DCI's 40th anniversary summer tour. "We are excited to be able to build on our successes of the last several years and take our organization to the next level by offering our members the highest caliber marching music experience possible," Oregon Crusaders Director Michael Quillen said. "As we look ahead, we're confident we will continue to bring innovative programs to the field that excite our performers and audiences alike." Oregon Crusaders Competitive Highlights 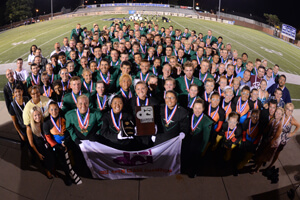 Oregon Crusaders after winning the
2012 Open Class World Championship.
The vote to accept the corps into the World Class is the culmination of an evaluation process involving an intensive review of corps operations and an ongoing dialogue between corps administration and the DCI Board of Directors. As a World Class corps, Oregon Crusaders will have access to an expanded schedule of DCI Tour events including regional championship shows like those held annually in San Antonio, Atlanta and Allentown. "We are very pleased to welcome the Oregon Crusaders into the ranks of DCI's elite World Class organizations," DCI Executive Director Dan Acheson said. "The corps' management has worked hard to develop its program in the Pacific Northwest over the past several years, and we are pleased to have the opportunity to work with them as they continue to expand their commitment to students from throughout their region." Oregon Crusaders is the first corps to make the jump from Open to World Class since Teal Sound in 2010 and Jersey Surf in 2009. In addition to its drum corps, Oregon Crusaders also runs the OC Indoor winter percussion line. The group is the 2009 WGI Percussion Independent Class A Champion and in 2011 became an Independent World Class Finalist. OregonCrusaders.org