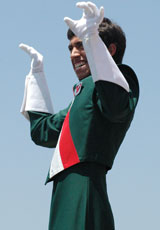 Edgar Guzman
The Most Outstanding Drum Major Award for Divisions II & III were given to Edgar Guzman of the Vanguard Cadets and Andrew Snead of Memphis Sound at this afternoon's final competition at Pasadena City College. The award is designed to recognize excellence in corps leadership and in conducting skills, and the two drum majors were very honored to receive the awards. They believe that drum corps has taught them to become better leaders and they're proud of what they have accomplished. "The entire corps has been great and it's been an amazing season for us. I really like to conduct with a lot of emotion and actually feel the music being played, and I think that adds to our unity," said Guzman. "Being the drum major has made me a lot more mature. There have been a lot of unexpected responsibilities I've had to deal with, but I just took the position and ran with it." 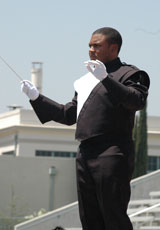 Andrew Snead
"It's actually a little unreal to win this award today. Being drum major has been a great experience so far, and to be rewarded at the end makes everything worth it," said Snead. "I've learned to be my best even when I feel at my worst, to make something better every day and to just be a better person. It's been just fantastic to stand in front of and represent this corps." Snead is "aging-out" of the activity this year and Guzman is planning on auditioning for the Vanguard A-Corps next year.