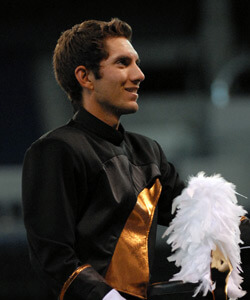 Zachary Headden
Pacific Crest of Diamond Bar, Calif. and the drum corps community tragically lost one of its members early this morning. Zachary Headden, a four-year member of the corps and head drum major in 2008 and 2009, was killed in an auto accident on the 60 Freeway in Diamond Bar. Fellow Pacific Crest alum Armando Duenas sustained injuries in the accident as a passenger in the car, and is currently in stable condition at the University of California Irvine Healthcare Center in Orange, Calif., according to his sister. "I am shocked and deeply saddened about this," said Pacific Crest Executive Director Stuart Pompel in a communication to Pacific Crest members, alumni, staff, board of directors and volunteers. "The entire Pacific Crest family is stunned, and when corps members call me, I'm asking that they get together to support one another during this incredibly difficult time." Additional details about funeral arrangements will be made available on the Pacific Crest Web site when available.