The Jersey Surf Drum Corps is leading the charge to enlist fellow musicians who will join forces this June to help kick off the 2014 Special Olympics USA Games taking place in and around Princeton, N.J. Debuted in 2006 and held every four years, the national event will bring more than 3,500 Special Olympics athletes from across the United States into New Jersey to compete in 16 Olympic-style team and individual sports before an estimated audience of more than 70,000. According to Jersey Surf Executive Director Bob Jacobs, the drum corps' involvement will be two-fold come the beginning of June, with Special Olympics events kicking off on June 14 and running until the 21st. First, the corps has taken responsibility to organize shifts of volunteer teams of musicians who will serve as "Spirit Squads," playing pep-tunes at three different locations on Special Olympics NJ Welcome Day, Saturday, June 14. On this day, Special Olympians will arrive at Trenton-Mercer Airport and at both the College of New Jersey and Rider University, where the teams of athletes will be housed during their stays in New Jersey. Jersey Surf invites any musicians of any age, instrument and skill level to join its corps members on this day, and interested individuals can register online to participate. Sheet music and additional instructions will be e-mailed to all volunteer musicians along with an invitation to a brief orientation session and rehearsal on Sunday, June 8, during the Surf's final rehearsal camp weekend in Sicklerville, N.J., prior to hitting the road for the summer tour. Secondly, Jersey Surf members will have the opportunity to play in uniform as part of the Special Olympics opening day ceremony on Sunday, June 15, welcoming athletes, families and guests to the Prudential Center in downtown Newark. 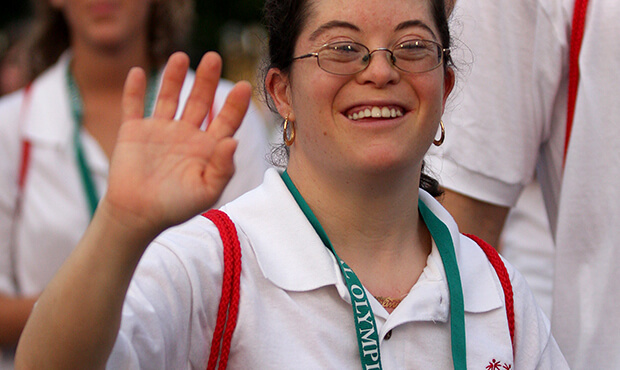 This June in New Jersey, the Special Olympics USA Games will showcase
the efforts of more than 3,500 athletes from throughout the U.S.
Jersey Surf's involvement in this event has been almost a year in the making thanks to the suggestion by Carol "Dee Dee" Clowry who is a Crossmen alum and a longtime volunteer with the Surf and the Special Olympics movement. Clowry anticipated that the corps could get involved with the 2014 USA Games taking place right in the ensemble's own backyard. "I'll be very excited to see Jersey Surf play a significant role in welcoming athletes from all over the country to New Jersey, in a way that only a drum corps can," she said. The Jersey Surf organization has been known for its prolific community service efforts, especially in recent years when the corps took a day off from its busy travel and rehearsal schedule last summer to help with Hurricane Sandy cleanup on the Jersey Shore. This winter the corps held a drive to collect donated pants as part of DoSomething.org's Teens for Jeans campaign, an activity which plays into the theme of the corps' 2014 production, "Pay It Forward," which it will perform as part of the Drum Corps International Tour. The corps also has a number of additional service activities planned for the coming summer. "The whole concept of our 'Pay it Forward' production this season is that we have the opportunity through our individual actions to be leaders regardless of competitive placement and whether or not we're making music on a football field," Jacobs says. "Like many DCI corps, our members, volunteers and staff are very socially conscious, and this spirit is truly an extension of the drum corps activity's overall ideals." The Special Olympics USA Games will kick off the very first weekend that the Jersey Surf leaves for its 2014 summer tour, the longest it has ever undertaken in its nearly 25-year history. Learn more at JerseySurf.org