Some columns are easier to write than others. This is not one of them. Since April 1, 1985, the Drum Corps International office has been blessed with the presence of one of my favorite people, Peggy Kosin. Today is Peggy's last day at the office after 18 1/2 years of service to DCI. She is about to enjoy a well-earned retirement. But as DCI's executive director states, "Peggy is retiring from employment, not from DCI." We'll still be seeing her as a volunteer at major events. 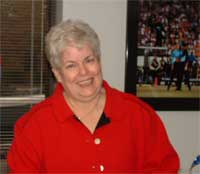