This picture is from Samantha Neel, a 2005 and 2006 member of the Pacific Crest color guard. 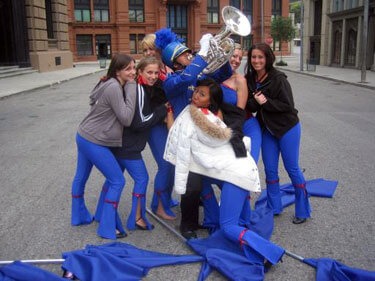 This picture is from way back in April at the filming of a Pepsi commercial that Pacific Crest took part in. It shows our 2006 drum major Mark de la Vega surrounded by past and present members of Pacific Crest's guard. None of us guard girls actually made the commercial, but we spent an exciting weekend on the Universal Studios back lot, freezing at the back of the block and waving at the Universal Studios tours.