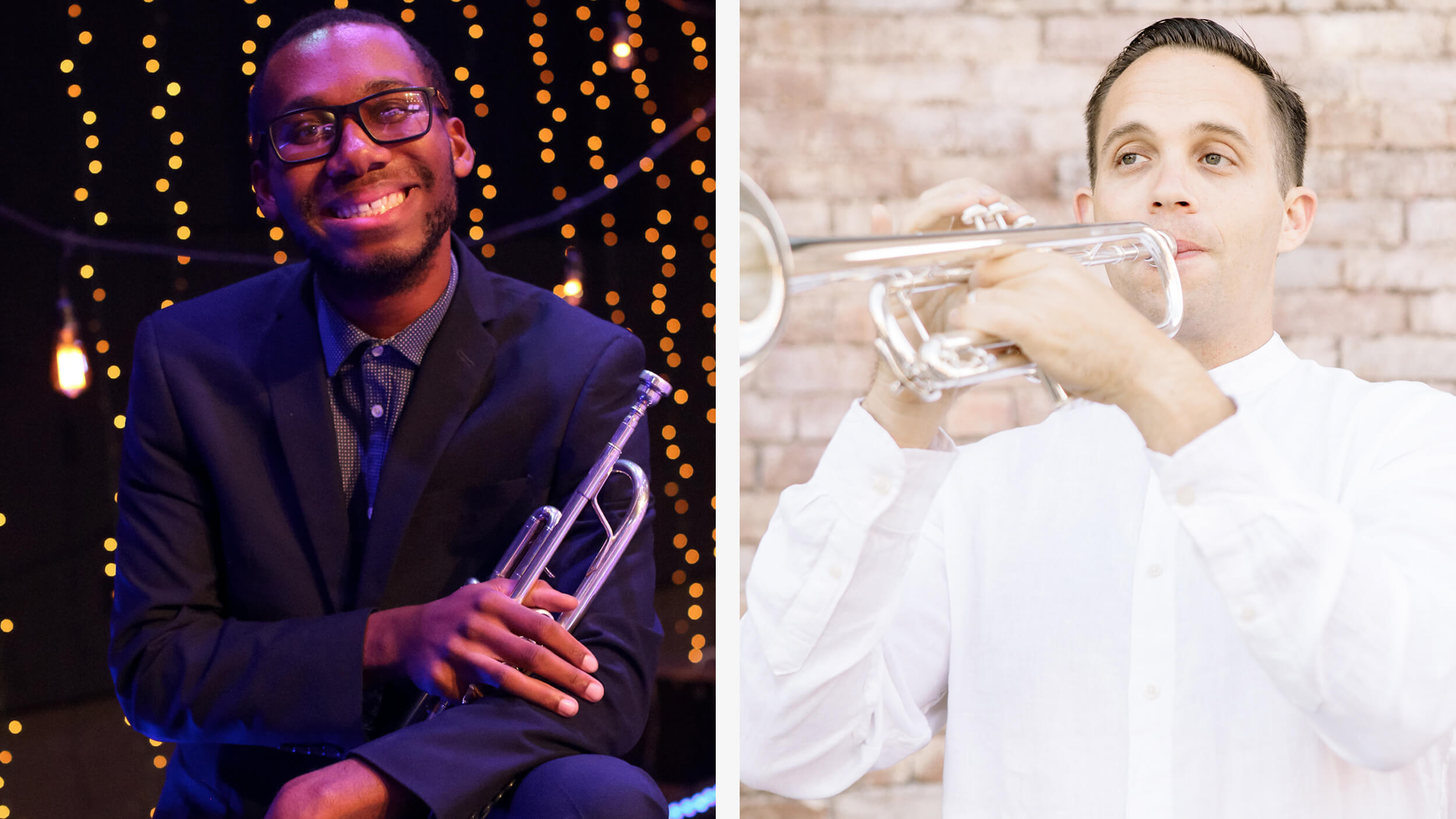 John Brannon (L) and Ryan Darke both competed as part of the DCI Performers Showcase during their time with the Blue Devils.

There are a handful of Individual & Ensemble competition (I&E) gold medalists who have achieved a life experience beyond Drum Corps International. These performers reached a pinnacle of achievement in competitive drum corps, then went on to extend that into their everyday lives. A few are living the trajectory toward this goal even now. Two such musicians share a commonality that involved DCI’s I&E. Here is their story.

They both play trumpet. They both started in Pacific Crest and eventually Blue Devils. They both participated in I&E as soloists and, through practice and diligence, achieved success.

The first time Ryan Darke, 34, participated in the annual competition was in 2003 with Pacific Crest. Not just as a soloist, but also with their mixed ensemble, performing Arturo Sandoval’s “Rhythm of Our World.” Darke remembers working extremely hard on the piece with their group, which paid off with winning a gold medal.

When he joined the Blue Devils for the 2004 season, Darke knew he wanted to continue with I&E. That first year, he won, but there was a lot of pressure: He was young, still in high school, and a rookie in his new corps. The pressure was off the second year though. He was more comfortable with his piece, a flashy number by Carl Höhne called “Slavonic Fantasy” and garnered another medal.

Trumpeter John Brannon, 21, also began his DCI experience with Pacific Crest in 2016 and 2017, then Blue Devils beginning in 2018. “I competed in Performers Showcase in 2018, 2019, and plan on doing the online competition this year, all on trumpet.

In 2018 Brannon placed third performing Hindemith’s “Sonata for Trumpet.” “In 2019 with a lot more prep and practice I placed first in solo trumpet with Kent Kennan’s ‘Sonata for Trumpet and Piano,’” he explained.

“2018 was my first year competing and I very much could have prepared more and budgeted my time better,” he said. “Contrarily, for 2019 I was determined to do significantly better to prove to myself that I can. So I picked my piece a few weeks before Blue Devil move-ins, and started getting to work on it, getting comfortable with sections that were more difficult and asking my teachers at home to help me.

“I knew this time around how much time I would have to rehearse my music over tour, so I was able to plan ahead. By the time the summer tour came around, I was able to do a lot more listening on long bus rides and research of the piece to find different interpretations to be able to add my own nuances and musicality to the performance.

“Over the course of the summer, I was able to find a find a few hours worth of free time in which I could find a classroom to actually practice the music and implement things I may have learned from listening to other performances of the Kennan.”

As with all performers this year, Brannon’s practice has been a little bit different due to the COVID-19 pandemic, but, remarkably, for the better. “It’s opening up a lot of my own time, so I’ve been able to practice in a calmer and more controlled environment which I feel will greatly help in the performance of my 2020 competition piece!”

For Darke, “The whole I&E experience of pushing myself to the max was important. It kept me honest with my classical studies. It pushed me.”

His advice? “If you can handle it — if you’re trying to grow as a musician — take the chance. It’s an opportunity to take. You will grow.” And he adds: “One success doesn’t make or break you, but it makes you grow stronger. Just like going to the gym, you need to build yourself up and do that by competing.”

Brannon’s advice is also based on his overall experience with the Performers Showcase. “I encourage as many people to participate as they can! It challenges an individual to hone their personal craft in a time when so much focus is set upon maxing out your competitive show. Setting that responsibility on yourself teaches you time management skills and almost a humility of knowing you have to roll with the punches to still do your best job at both tasks.

“The aftermath of the Performers Showcase, especially in 2019, was something I was not expecting. The publicity and congratulations I received was innumerable. I distinctly remember walking out of the stadium tunnel after the I&E awards ceremony Friday night (of World Championships Week) and getting congratulated by so many people who I had never even met before. But they all knew my name. That was something special right there. I felt like a superstar!“

This building up of performance ‘cred’, contributed to both Brannon and Darke’s current success. For Darke, it has led to a life as a professional musician.

After undergraduate and graduate work at the Colburn School, Rice University and Cal State University Long Beach, Darke went on to perform as second trumpet with the Baltimore Symphony, and principal trumpet with the San Diego Symphony. He also spent a year at the New World Symphony under the direction of Michael Tilson Thomas and taught at the OrchKids program with the Baltimore Symphony, Youth Orchestras of Los Angeles (YOLA) through the LA Philharmonic, and, while touring with the LA Philharmonic, taught a master class in Venezuela’s “El Sistema.” This all lead to his current position as working principal trumpet of the Los Angeles Opera Orchestra.

In recalling his I&E experience back in 2005, Darke’s fondest memory was walking into the performance room with an entourage. “There were people from Europe who had begun following us around the venues that day. They were very supportive. It was an interesting feeling to see the room go from empty to packed by just walking in with 40 people behind me. If you have that kind of support — it always feels good.”

“One of my favorite memories,” Brannon recalls, “was being in Houston this past summer. After a long rehearsal day, a small group of people including Shelby Plaugher (highest-scoring 2019 Performers Showcase winner), Megan Sellman, Shane Vincent, and myself all found a small external gym and even though we were all exhausted, we took the time to get some extra practice in. Megan and Shelby were dancing to help clear their minds, Shane was practicing some repertoire for his then upcoming transfer auditions, and myself prepping for I&E.

“Every one of us was just taking our own little space, unbothered by the others in the room, working on the things we all feel so passionately about. That verbally silent connection that we felt just in the room was one of the most beautiful and intimate moments that I relate to my Performers Showcase experience. It was a peaceful spontaneous moment watching us all create our art in our own caliber. Absolutely beautiful.”

These days, Brannon is finishing up his last year at Riverside City College studying trumpet performance. He keeps busy as the soloist for the marching band, lead trumpet for the jazz ensemble, and principle chair of their wind ensemble. His aim is to transfer to USC to their classical performance studio in the fall of 2021. He will also age-out with Blue Devils in 2021.

For Darke, he enjoys a diverse career as a performer and educator, and this summer created an academy called Trumpet Forward where students study with clinicians and teachers — all digitally, of course. In the meantime, you can catch his work on prestigious scores like “The Mandalorian,” “Mulan,” and “The Greatest Showman.”

With one final piece of advice, Darke concluded, “Whenever you make a video submission — make it great. Always put your best foot forward and the best of your abilities.” 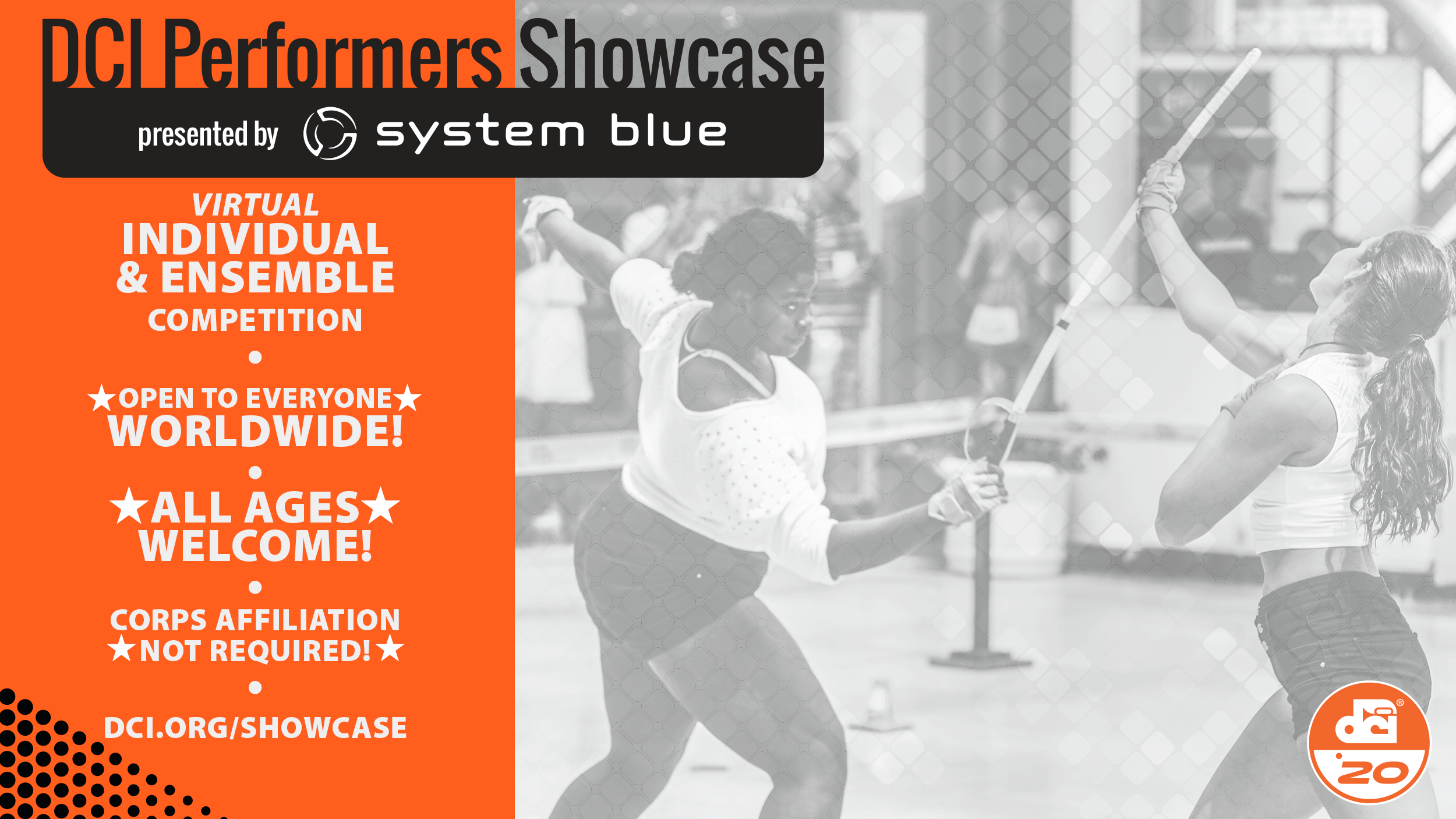