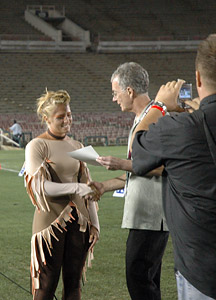 "George did so much for the drum corps activity," said Adam Sage, Phantom Regiment color guard caption head and one of Zingali's former students. "I know he would be proud to know Lindsay Brooks and the character she possesses."

George Zingali was inducted into the DCI Hall of Fame in 1991. He is frequently hailed as a creative genius instrumental in the development of visual design in both WGI and DCI, working with the 27th Lancers, Garfield Cadets and Star of Indiana on the drum corps field and St. Anthony's of Revere, Quasar, and Emerald Marquis in the winter guard activity. The George Zingali Memorial Fund, which funds the scholarship awards, was formed soon after Zingali's death in 1992.

George Oliviero, chairperson of the George Zingali Committee, which chose the scholarship award winners, presented the award on Aug. 10 at the DCI World Championship Semifinals in Pasadena, Calif.