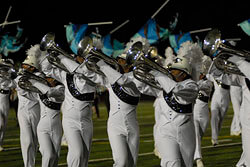 Phantom Regiment
Phantom Regiment (79.70) took no prisoners tonight with a performance that blew audiences and the competition away at the DCI Chicagoland major event in Lisle, Ill. The corps remained victorious against the Bluecoats (78.20), Madison Scouts (65.05), Southwind (63.55), and Pioneer (57.15) in a show that left fans standing after every performance. This was the first night Phantom Regiment saw the Bluecoats this season and although there was only one winner, both corps were very pleased with tonight's performance. "Tonight's show was awesome," said Ryan Delagarza, a Phantom Regiment euphonium player. "Musically and visually it was one of the better shows we had." 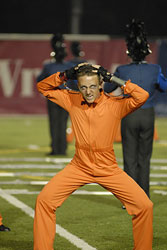 Bluecoats
Lizz Lewis, the drum major of the Bluecoats, said "Our show went really well tonight. There was a lot of energy in our performance and I felt we really entertained the crowd." The two corps will go their separate ways tonight as Phantom Regiment travels to Lexington, Ky., and the Bluecoats to Normal, Ill. They will not meet head-to-head again until July 14 in Atlanta, Ga. Until then, the corps will surely be working hard for the best performance of the year. Although the Bluecoats came in second place tonight, they remain confident in their 2007 cops-and-robbers themed show "Criminal." "I feel pretty good about where we are" said Lewis. "We've got an awesome show this year, and we're going to take it as far as we can." View all scores from this event.