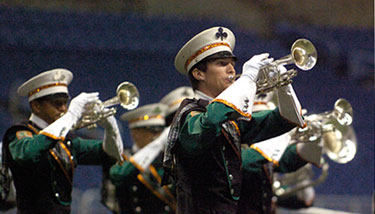 Pioneer will kick off the 2007 season with a public performance
this Sunday in Milwaukee.
"The importance of this event flows through the entire organization," said Pioneer Executive Director Roman Blenski. "The number one priority is of course the opportunity to play in front of the local audience and our alumni. It also helps to enforce the goals of memorizing the music, fitting the uniforms, and the esprit de corps of new members performing in front of the public for the first time. All of this adds up to the importance of the event." Blenski added: "We are also grateful to the other participants for their efforts in making this Pioneer event successful."