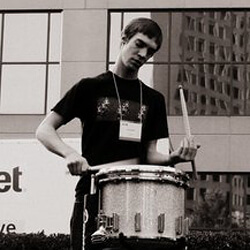 Dan Sailer
Dan Sailer, 21 Concordia University Phantom Regiment 2007-2010, Santa Clara Vanguard Snare 2011 What do you think is important in choosing which corps to audition for? Pick the corps that you love. If you're younger, pick one with a similar identity (For example musical style and technique, show design, section strength, instrument type, or whatever). It can really benefit you when you finally get the chance to audition for your "dream corps." Location is important. Remember plane tickets are much more expensive than gas. And, maybe most importantly, know someone affiliated with the corps! A corps member, staff member, or volunteer can be a crucial asset at your first audition in November. How do you like to prepare for an audition? I am a huge nerd, and I watch DCI DVDs or YouTube videos. I am a pretty busy college student, so I don't have much time to prepare for an audition in advance, but a few weeks before I am probably practicing for half an hour to an hour a day. I like to talk to my friends and see how they're feeling about the audition and if they're as excited as I am. What was your experience like the first time you auditioned for a corps? The very fist corps I auditioned for was Pioneer in 2006. I enjoyed it completely, and I even got a call back! The very next weekend I went to my first Phantom Regiment audition. I was wowed by these staff members who had taught my favorite drum corps. They were so willing to give a freshman in high school the same opportunity to audition as a 21-year-old. I drummed pretty well, and I was even made as an example by Paul Rennick (percussion caption head). "Watch out," he said. "This 16-year-old can play." I will always remember that. Paul was gracious enough to give me a callback, even though he told me I was too young to be in his all-star drum line. That was enough for me. I went back to a couple camps and I learned the ropes. I came back in 2007 and got a spot. Auditions are easy for me now. After being a veteran member, I know the process and how to prepare. The staff wants to know that you have the ability to handle the technique, physicality, and endurance of an entire summer. During my drum corps career I've had the unique opportunity to change corps. Auditioning for the Vanguard was eye-opening for me. It was crazy to be in California in the sun, and not the dismal wintry Midwest. Even though I had connections with other percussionists, which was a great relief, I met new people. My audition went well, and the social aspect of it all was quite an adventure. What advice would you give to somebody who is nervous or unsure about auditioning? Just go for it. It takes a huge amount of confidence to really play at the level that you know that you can do. I am always incredibly nervous, I admit, even though I know all of the audition exercises. If there is an individual solo, play something that showcases your best abilities and musicality. Don't play something that you "think" the staff wants to hear. Remember, they may see hundreds of kids audition in a short weekend. Try to pick something to play that is unique and effective. Any other tips? It's hard to prepare for camps in the winter when I know that the bulk of the drum corps experience is in the summer. But, every little bit of practice and preparation helps. The staff wants to know that you're still practicing in between camps. Chances are that they have a primary occupation, too, so they understand what you're up against. However, being prepared for camp is a perfect way to show other members that you're willing to give your best effort to the corps. I constantly think about my "drum corps life" because I know that it beneficial to me in everything else that I'm doing. It is an outlet, and something that I am proud of. Every time I sit down to memorize music or practice my left-handed paradiddle diddles, I know I am doing work that will pay off in the middle of July. Learn more about corps audition dates, locations and additional info.