By Flo Brown
Glassmen
CrAzYMoFLo@aol.com It happens to the best of us, even more so when we try to resist it. 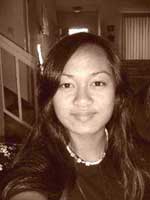 Flo Brown
Between the breakneck schedule, the hectic rehearsals and the stressful shows, avoiding attachment to the people around you is impossible. They represent strength and stability, and they offer a sense of "home" amidst the chaos (as Krista explained in her last article). ^But sometimes that familiarity is impossible to let go of. Sometimes two people become so dependent on each other that their relationship doesn't simply end at DCI Finals ... and that's when it gets messy. Post-drum corps long-distance relationships are usually regarded like an illness, or a social defect. When I began catching up with my friends after a one-month recovery period, they all said the same thing about my relationship: "Aww poor thing. I thought you two broke up already," followed by the obligatory, "but good luck anyway!" Gee, thanks for the vote of confidence. Tricky? Yes. Impossible? Sometimes. People are afraid to say it, but having a long-distance relationship at this age won't work unless the people involved are serious about each other. Whether they intend on marching together again or they've got bigger plans, the minimum requirement is that they're willing to commit off-season time to see each other. It seems easy enough, but there are several circumstances to consider before taking the plunge. You will only get as much as you put in. This holds true for any relationship, but when the distance divides you, the required effort multiplies. If you decide that school or work is going to prevent you from calling every night, realize that it'll put a strain on your relationship. You have to need each other equally. Transportation. If you live in the same state, you are among a lucky minority. I've been flying between Dallas and San Francisco for more than a year now, at a cost of well over $2,000. This doesn't include my trips to audition and rehearsal camps. Time. Does this phrase sound familiar? "I'm sorry, I meant to call you but I was really busy and I lost track of time." In a normal relationship it would be OK, but when that call is your only link to each other, it monopolizes trust and causes arguments. Loyalty. How willing are you to set aside others in favor of someone you barely see? It's one of the biggest obstacles you'll have to overcome, because you'll have to trust both the person you're with AND yourself. Temptations are strong during college, especially with the introduction of new people in your life. Can you deal with skepticism from all sides? As I mentioned earlier, friends will question your relationship (sometimes even argue it) and you'll have to remain strong in your loyalty. As scary and pessimistic as all that sounds, long-distance relationships can and do work - and they're worth it. I've been with Steve since July 2002, and though I could definitely have done without the stress my freshman year of college, I could never have gone without his strength. In January I'm moving to Texas, and I couldn't be more sure of anything in my life. Good luck to those of you who seek a similar goal. Florence Brown, 19, is a journalism major (with a minor in dance) at San Francisco State University. This spring, she will transfer to the University of North Texas. She marched with the Glassmen in 2002 and 2003, and with the San Jose Raiders World in 2003.