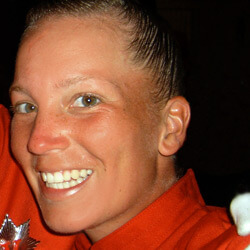 Erin Holtz
Erin Holtz, 21 Boise State University, music education Troopers, 2004-2005; Santa Clara Vanguard Mellophone, 2006-2009 How did you choose your corps? I had several reasons for picking Vanguard. First, it was easier on me financially than any other top 12 drum corps, and that was a big factor since I had been planning to march all five of my remaining seasons of eligibility. Second, I felt that the Vanguard was a corps with the same values as me. Last, I idolized the incredible shows SCV performed before I joined, and I wanted to be a part of something great like that. In your experience, what's the best way to prepare for an audition? Practice, practice, practice. Practicing under different conditions helps a lot too. Practice when you're tired after a workout, when you're stressed about school and work, and when there are lots of distractions. The better you know your material under pressure, the less chance there is of messing up in your audition because of nervousness. What can a prospective corps member expect when he/she shows up for an audition weekend? Be ready for a lot of people and a lot of organized chaos. Everything is going to seem hectic at the audition. If you go with the flow and ask questions when you're not sure about something, everything will be fine. The first time you auditioned, was the process different from what you expected it to be? My first audition at SCV was very much what I expected. Most of the weekend was spent with the full horn line or in high/low brass sectionals. Individuals were evaluated based on their abilities with the group. The only one-on-one audition experience was for a five-minute audition where we played our pieces for our section staff tech. Were you nervous at your audition? I still get nervous for my auditions! The best way I've found to get past it, is to believe that you deserve that spot more than anybody else. If you can believe it you'll play with confidence rather than nerves. What do you think is most important for someone to take away from the audition experience? The work ethic it takes to make it as far as you did. If you earned a spot, congratulations! Now the work really starts, and you better build on that drive and determination until August. If you didn't make it, evaluate how you prepared for the audition so you can fix those issues before your next opportunity. If you didn't get a spot, don't let that be the end of your dream. Check out corps in the spring because chances are several groups will have open spots they need members to fill.. Any other advice? Introduce yourself to people, especially the veteran corps members. It's a good way to hear stories about what it's been like in the corps the last few seasons, and it really helps to have a friend at the auditions. The lasting memory I have of my audition in 2006 is a conversation I had with one of the vets. It helped so much to know that she had been in the same position as I was in and that I had a friend to go to if I needed anything. Learn more about corps audition dates, locations and additional info.