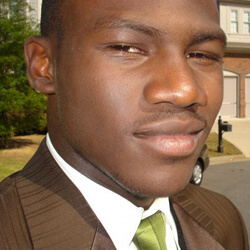 Onye Eme-Akwari
Onye Eme-Akwari, 19 Kennesaw State University, Psychology Alliance (all-age corps) 2007-2009, Bluecoats Tenor Drummer 2010-2011 What do you think is important in choosing which corps to audition for? One important thing when looking for a corps to audition for is to do your research. Every corps has a unique show style and approach to teaching. It's about knowing what drum line, horn line, or color guard really speaks to you. Observe everything from corps traditions, the style of music and show design, and maybe most importantly how they carry themselves. You have to be able to see yourself as a performing member of the corps at some point in your marching career to really invest in the audition process. After watching the 2007 and 2009 Bluecoats drum lines in the warm-up lot at DCI Atlanta, I knew that's where I wanted to audition. The most important thing, however, is to make sure you actually do go out and audition. Many people talk about it, but never follow through. Anywhere you go to audition, you will almost certainly learn something new about your craft. How do you like to prepare for an audition? I like to prepare for an audition by making sure I have a good handle on the audition material. It's good to be able to read through it, and it helps if you memorize the material too. Preparing for my 2010 audition at Bluecoats, I downloaded some of the exercises from YouTube that were the same in the 2009 audition to my iPod. That way whenever I got a free moment, I would just listen to the recordings to get a better feel for how to approach the material when I played it. I also like to practice audition material with other people who are auditioning for the same corps. Having somebody else there to help benefits both of you when it comes time for the actual audition. What was your experience like the first time you auditioned for a corps? The first time I auditioned was in Texas for the 2010 Bluecoats season. I had no idea what to expect, so naturally I was pretty nervous. After a few hours of drumming, however, I felt a little more comfortable. My methods for preparing for the audition definitely helped, so I ended up getting a callback. The instruction was great and very helpful. Jeremiah Salisbury (Bluecoats snare 2007-2009) provided some very useful information and ultimately aided my success at the audition camp. The callback camp was the same way. Mike Jackson, Tim Jackson, and Mike McKenna (percussion staff members) all provided very helpful information that eventually led to me getting a contract at the end of the camp. What advice would you give to somebody who is nervous or unsure about auditioning? I encourage anybody and everybody to audition for a corps. Even if you don't think you can actually make it, you should always go into a drum corps audition with an open mind. The amount of information you will learn from those who teach the professionals you admire in the activity is outstanding and worth whatever camp fee or travel fee you may have to attend the camp. It is also an excellent experience to drum, spin, or play with veteran members who have already been in the activity in previous years. If you are just going to an audition to learn, it is a great experience because later, when you have matured as a performer, you will know what to expect. Any other tips? Coming into an audition, you have to be confident in your abilities and in your knowledge of the audition material. While it is an audition, don't be afraid to be social with the people around you. Instructors don't just look at the way you play, they also look at how you carry yourself and the vibe that you put off. They see how well you can interact and work with your peers, and how well you take instruction and constructive criticism. If you are lucky to get a callback, then personally go up to the instructors and ask them what you can work on in between camps. Take this advice and apply it to your practice and when you show up to the next camp, you will leave a good and lasting impression on those who you audition for. Learn more about corps audition dates, locations and additional info.