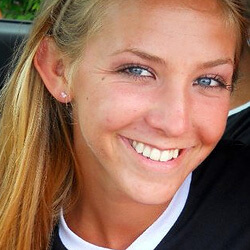 Jackie Stine
Jackie Stine, 21 Massachusetts College of Pharmacy and Health Sciences Boston Crusaders Color Guard, 2008-2010 How did you choose your corps? I chose to march with Boston because I was brought up around drum corps. Both my parents marched in the '70s at Boston, and I also had four aunts and an uncle who marched with Boston. The family influence and the history, tradition, and dedication of Boston made me want to audition there. What was the experience like the first time you auditioned for a corps? The first time I auditioned, I was terrified. I didn't know what to expect, and I didn't know anybody else there. Throughout the day, the staff worked to make everyone more comfortable and confident, and I ended up having a great time. But initially walking into the auditions, it was nerve-wracking. What's the best way to prepare for an audition? In my opinion, the best way to prepare for an audition is to physically get your body ready by running, doing strength exercises, practicing technique, and mentally preparing yourself for anything. Physical ability is important, but mental toughness, ability to cope, and being prepared to learn new things is the most important way to prepare for anything the staff may ask you to do. What would you say to someone who is unsure whether or not to audition for a drum corps? To anybody who is unsure whether or not they should audition, I would 100 percent say GO FOR IT! Auditioning can never hurt you. One of two things will happen. Either you get a chance to attend the next round, or you came away from the day having learned something new, met new people, became more familiar with the staff and organization, and had fun! Any other advice? The most important things I have learned to do at an audition are to meet other people who you're auditioning with, talk with staff about what they expect, introduce yourself to the director or whoever is in charge, always try your hardest, and perform confidently. Learn more about corps audition dates, locations and additional info.