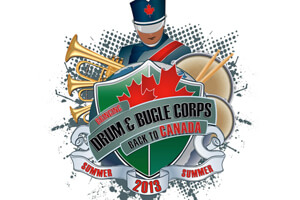 Two men are looking to bring drum corps back to Canada in a big way in 2013. Show sites currently being considered are in Montreal, Quebec and Kingston, Ontario.

"I've always felt bad that Canada has not had a DCI level show in more than a decade," Vickers said. "And Canada used to have dozens of corps, and some prominent corps that made the Finals — both in World Class or Open Class."

The DCI World Championships were twice hosted in Canada in the 1980s at Montreal's Olympic Stadium. Currently there are two junior corps in Canada participating in the 2012 DCI Tour, Blue Saints in Ontario and Les Stentors in Quebec.

Vickers said the first thing they did in their efforts to bring drum corps back to Canada was contact the Canadian government. Specifically, the office that facilitates large groups crossing the border, which historically had been a large hurdle for corps to overcome.

"Crossing the border often became a big hassle for the corps," Vickers said. "They'd be asked to empty every truck and every bus for inspection, often in the middle of the night."

The next step the duo took was putting together an extensive proposal that explains drum and bugle corps history, and the history of Canadian corps. They also released a survey last week in order to gauge how to provide fans with the best potential experience.

"The response so far has been primarily from Canadians, because that's where most of our emphasis has gone," Vickers said.

The survey is six questions, with questions such as, "If there was a show on a Saturday evening in Montreal, QUE, would you make it a weekend road trip, perhaps spending Sunday enjoying Montreal, and then travel to Kingston, ONT, for a Monday evening competition?"

"For the event we are looking for stadiums that have a minimum of 6,000 seats," Vickers said. "We have a stadium in Queens University in Kingston, Ontario — the second show of the pair. We're still trying to pin down a stadium in Montreal."

Vickers is hopeful they'll have a stadium nailed down by August, and be able to make a firm commitment to Drum Corps International when the 2013 schedule begins taking shape in the Fall.

Ultimately he would like to see this project encourage the rebuilding of the drum corps circuit in Ontario and Quebec, and with time, the restarting of junior corps in Canada.

"Eventually, if this is a successful over a period of time, we'd like to set up a matching grant program that would give out financial grants to organizations that are interested in starting up a new corps," Vickers said. "They wouldn't be big grants, maybe $10,000. But $10,000 is a good chunk for a start-up group."

Take the survey and sign up to stay informed.