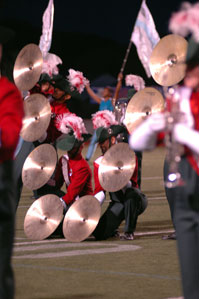 The iconic Vanguard cymbal "V."
2008 was another season for the record books with strong showings from all corps, a bevy of exciting programs, and competitive placement swaps that continued all the way through the week of the World Championships keeping spectators in suspense. The 2008 Summer Tour may also be remembered as the beginning of a cymbal line renaissance. Once seen in almost every corps, marching cymbal players over the years have often been reassigned, their cymbal sounds incorporated in front ensemble arrangements rather than on the field alongside the marching battery percussion units. This season, almost half the corps in the World Class fielded "plate lines," with the Madison Scouts and Spirit bringing their cherished lines back to the field and the usual suspects—the Academy, Colts, Crossmen, Pacific Crest and Pioneer all with strong sections. While the cymbals remain a unique marriage of auditory and visual excitement, one corps' cymbal line is perhaps the most respected in the activity, and "owns" one of the only visual moves many fans know by name. The corps is the Santa Clara Vanguard. The visual move is called the "Viper." First executed 20 years ago in the corps' 1988 "Phantom of the Opera" production, the viper is a limb-risking move where plates are whirled above heads and beneath legs of the four-person section, requiring the utmost precision in timing which leads to a truly visceral thrill. (See what the Viper looks like in the video below.) It's one visual that highlights an entire performance of presence, focus, and intensity. But how do the players train to make their physical and musical performance as precise as possible for the rest of their production? "It really starts right at our audition camp," said Brandon McVeigh, who has been a member of the Santa Clara Vanguard organization since 2002. "All the people in the cymbal line live in the same town. From January up until we leave for tour in June, we have rehearsals three times a week, about 10 hours a week." "I'd say the most important part is really the standard that we set ourselves to," agreed Nithin Kumar, who was marching in his second season in 2008 with Vanguard's "A" corps after spending two years with the Vanguard Cadets. "With as much work as we put in, it can start out pretty rough at the beginning of the season. But after months of practice in the off season and by the time we hit every day rehearsals and the summer tour, we have everything down pretty well." 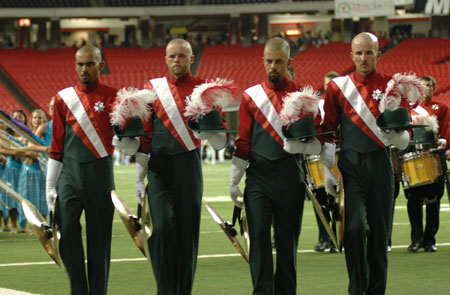 The 2008 Santa Clara Vanguard cymbal line.
From left: Nithin Kumar, Brandon McVeigh, Nick Richards, Tim Rorke.
It might sound like this much work and pressure could become drudgery, but not so according to Nick Richards. Richards is in his second year with the Vanguard "A" corps after one in the Cadets, and said, "It's actually really fun. We get to be really original and come up with different visual moves that we think will look cool. It might be, 'we have this many counts, well, we could do this,' 'oh, but what if we did this,' someone else chimes in with another idea and it just goes from there. We get to come up with some really cool visuals and we have a lot of classics that we also use. We get to change everything up every year." And it's that amount of control over their visual repertoire that first led to the Viper's creation. McVeigh explained, "The person who invented the Viper was Guy Lampe. When he came up with the Viper, he just had a vision. Since [1988] we've been doing the viper with four and five people. In 2006, we changed the viper and made it a little different and this year we've made it different again." The changes have inched the intensity even further, and have made the move even more perilous and thrilling.
The SCV cymbal line performing their signature "Viper" visual.

Kumar stressed that the Vanguard cymbalists are acutely aware of the danger involved in such a move. He said, "When we practice the Viper, we practice with the utmost seriousness. At some times we may be joking around, but when it comes to practicing the Viper, we're straight faces all the way. Unfortunately, if we mess up, or if somebody misses a count, somebody could get hurt. So we make sure when we practice the Viper, we're always 100 percent serious. No one has gotten injured so far, so knock on wood." Of course, the steely-faced figures slinging metal discs on the field are only one facet of the Santa Clara Vanguard cymbal line. Talking to them in the parking lot after a performance, they're approachable and extremely willing to talk about their passion for the plates. But even off the field, the Vanguard cymbals operate as a unit. "I can tell you one thing," said Kumar, "the four of us in the cymbal line, I can say with some certainty we're the closest four guys in our corps. We hang out with each other all the time, and we're really tight. Like we said earlier, we spend the whole off-season with each other. We're really close friends, besides members of the same corps. The staff makes fun of us sometimes because of that, but if they see three of us, they know the fourth one's not far behind."