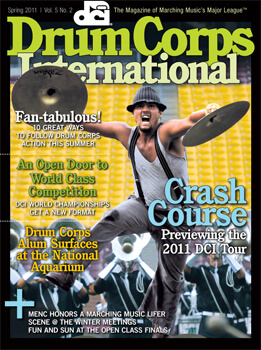 Step Up & Face Off: 2011 Season preview The Blue Devils have dominated both World and Open classes for two years running, but old rivals and some new contenders should make the race to the 2011 title a wild—and unpredictable—ride to glory. Your Summer of Drum Corps Ten ways to enhance your view and listening experience before, during, and after the 2011 Drum Corps International season—whether you're in the stands, at home, or on the go. Scene at the DCI Annual Meeting Snapshots from the 2011 edition of Drum Corps International's yearly gathering. Age-Out Former Jersey Surf trumpeter Amy Weldon is having a blast working with animals at the National Aquarium. Commitment to Excellence Marching music veteran—and former DCI education leader—Gary Doherty has helped an inner-city school achieve new milestones in the marching arts. Plus Lessons in brass, percussion and color guard ... Open Class corps enter another World. … Tour of Champions … Traveling to DCI events in style … Off-field fun at the Open Class Finals … A new voice for I&E … and more!

What you'll see on the August 8 MarchOn! Telethon
Read more