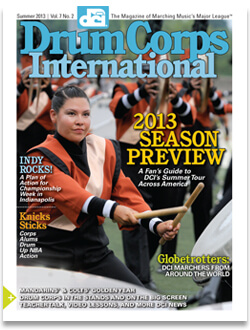 DCI's traditional combination of artistry and athleticism meets new faces and places, giving 2013 the potential to be the hottest — and most entertaining — season on record.

Whether they're touring with groups from their respective homelands or filling the ranks of U.S.-based corps, DCI's international members display talent, commitment, and culture both on and off the field.

With pulsating action at Lucas Oil Stadium and great off-the-field events all around town, Indy will once again be the place for all drum corps fans in August.

Online lessons in the off-season have helped the Colts get ready for 2013.