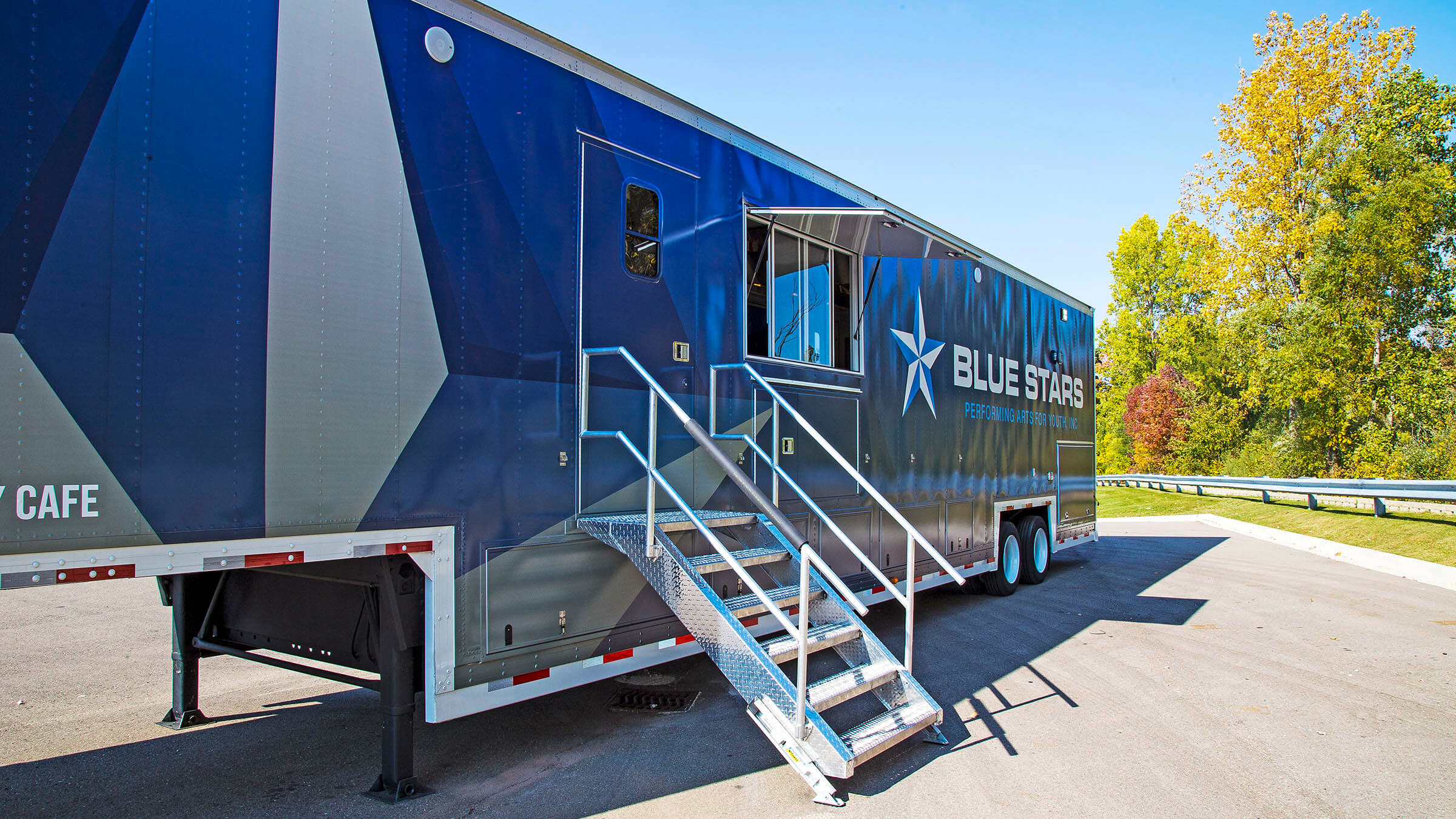 In a year that’s seen drum corps activities come to a screeching halt due to the coronavirus pandemic, one of the bright spots this past fall for the Blue Stars of La Crosse, Wisconsin, was the completion of a custom-built kitchen trailer.

The newest upgrade to the corps’ vehicle fleet has been dubbed the “Cullenary Café,” named after a charter performer of the Blue Stars and longtime board of directors member Charlie Cullen, who stepped forward with a generous donation to kick off the corps’ fundraising campaign.

Blue Stars executive director Brad Furlano says that the project has been three years in the making, going all the way back to the summer of 2017. “The first two years were primarily focused on fundraising, and toward the end of that second year we greenlit purchasing the box, the actual trailer, to have that ready to customize,” Furlano said. “Also in the second year, one of our alums is an architect, and he did some work converting our napkin drawings into something real.”

A number of other corps have debuted food trucks in recent years, and Furlano said that he and his team had the opportunity to spend time going through those corps’ kitchens, taking copious notes as they hashed out a number of different ideas for fitting the needs of the Blue Stars.

All told, more than 500 donors contributed to make the project happen, resulting in the largest capital campaign in the history of the organization. They then turned to the specialty build department of the Louisville-headquartered Kentucky Trailer to do the fabrication at a facility in Wixom, Michigan. “Their build crew had an amazing level of skill and attention to detail and were able to turn our craziest ideas into reality,” Furlano said.

Originally scheduled to take about three months to fabricate in anticipation of rolling out with the corps for its 2020 summer tour, the coronavirus shutdown across the country briefly put a hold on completing the project. In all, Furlano says the trailer took about six months to build out before they took the keys in mid-October and promptly put it into storage until the corps is ready to march (and eat) again.

The Cullenary Café By the Numbers 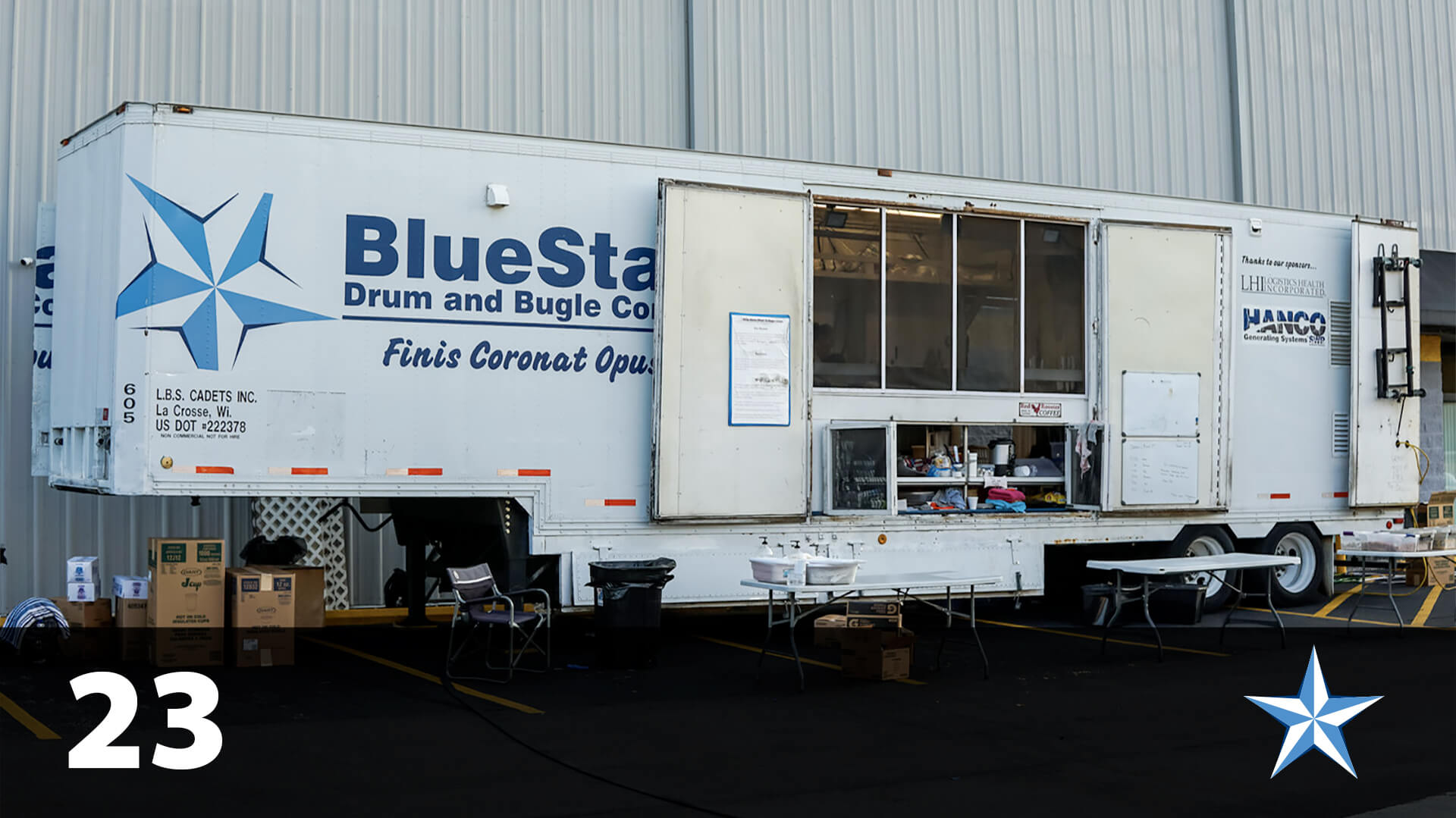 23 • Number of seasons the Blue Stars’ old food truck was in service. Originally outfitted as a kitchen for the corps in 1997, it was refurbished twice in 2009 and 2016. 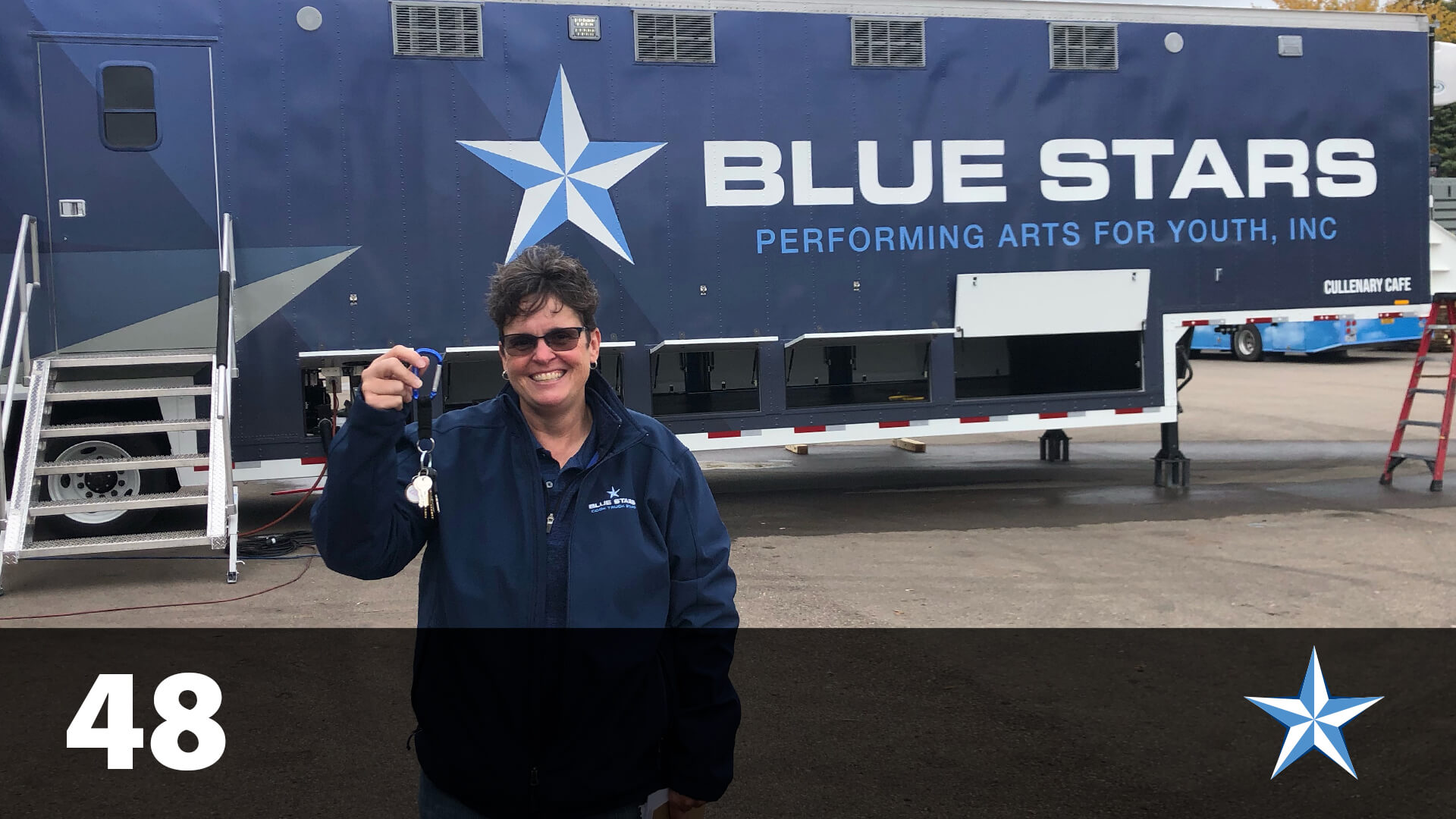 48 • Number of inches the floor of the Cullenary Café’s kitchen sits off the ground. This creates a sizable storage bay with outside access underneath to facilitate speedier setup and teardown upon arriving at a new housing site. “Our goal was to make this so the cooks could come in and open the doors in the morning and start cooking immediately instead of having to move a bunch of stuff stored in the aisles,” Furlano said. “While they’re working inside, there can be a whole different crew setting up tables and getting ready to serve.”

6 • Number of burners on the cooktop. Other major appliances include a double convection oven, tilt skillet and a 48-inch griddle. 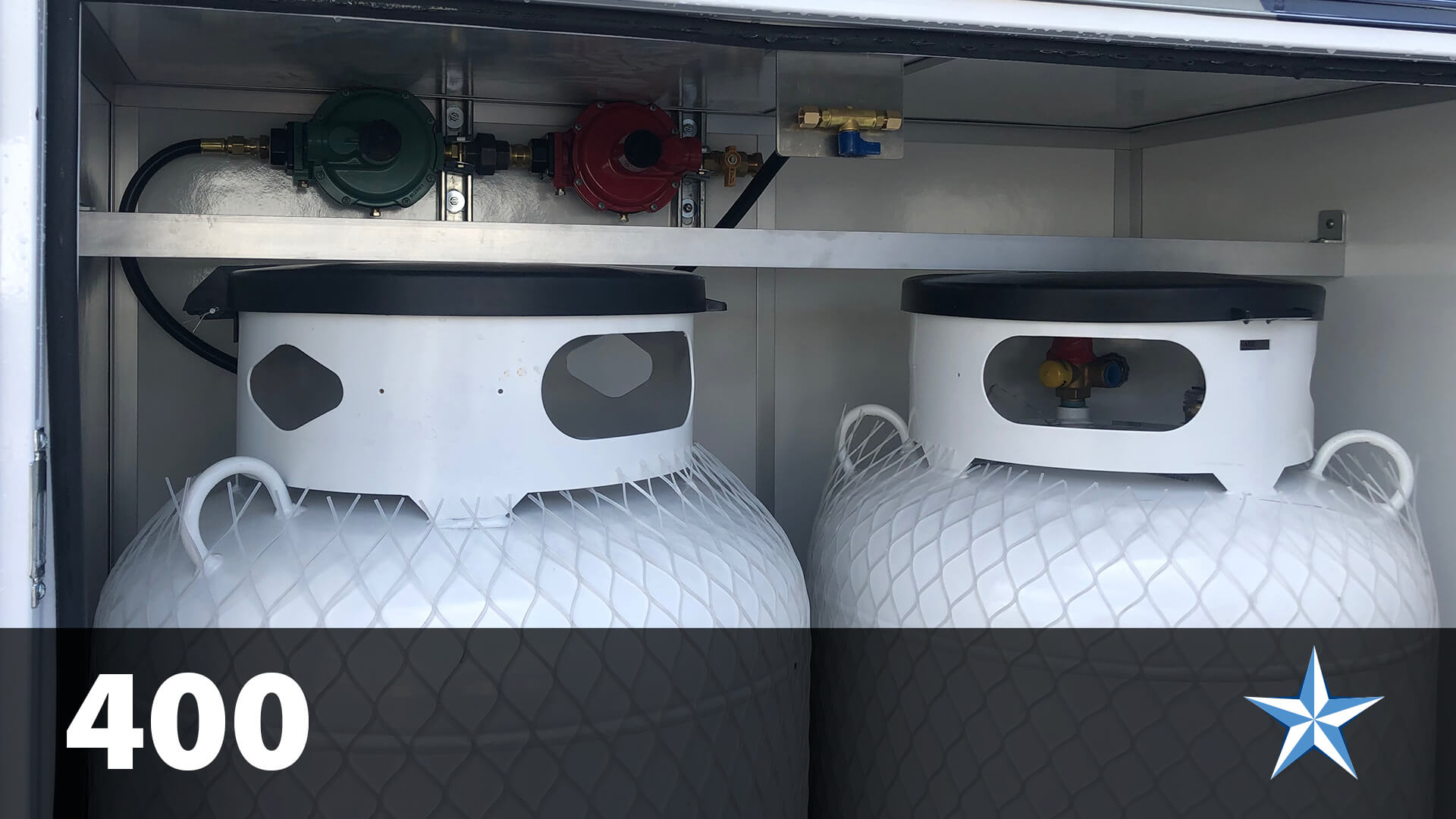 400 • Number of pounds of propane carried on the trailer in two 200-pound tanks. While still to be tested, Furlano estimates that the corps will be able to go two weeks on the road before needing a refill. 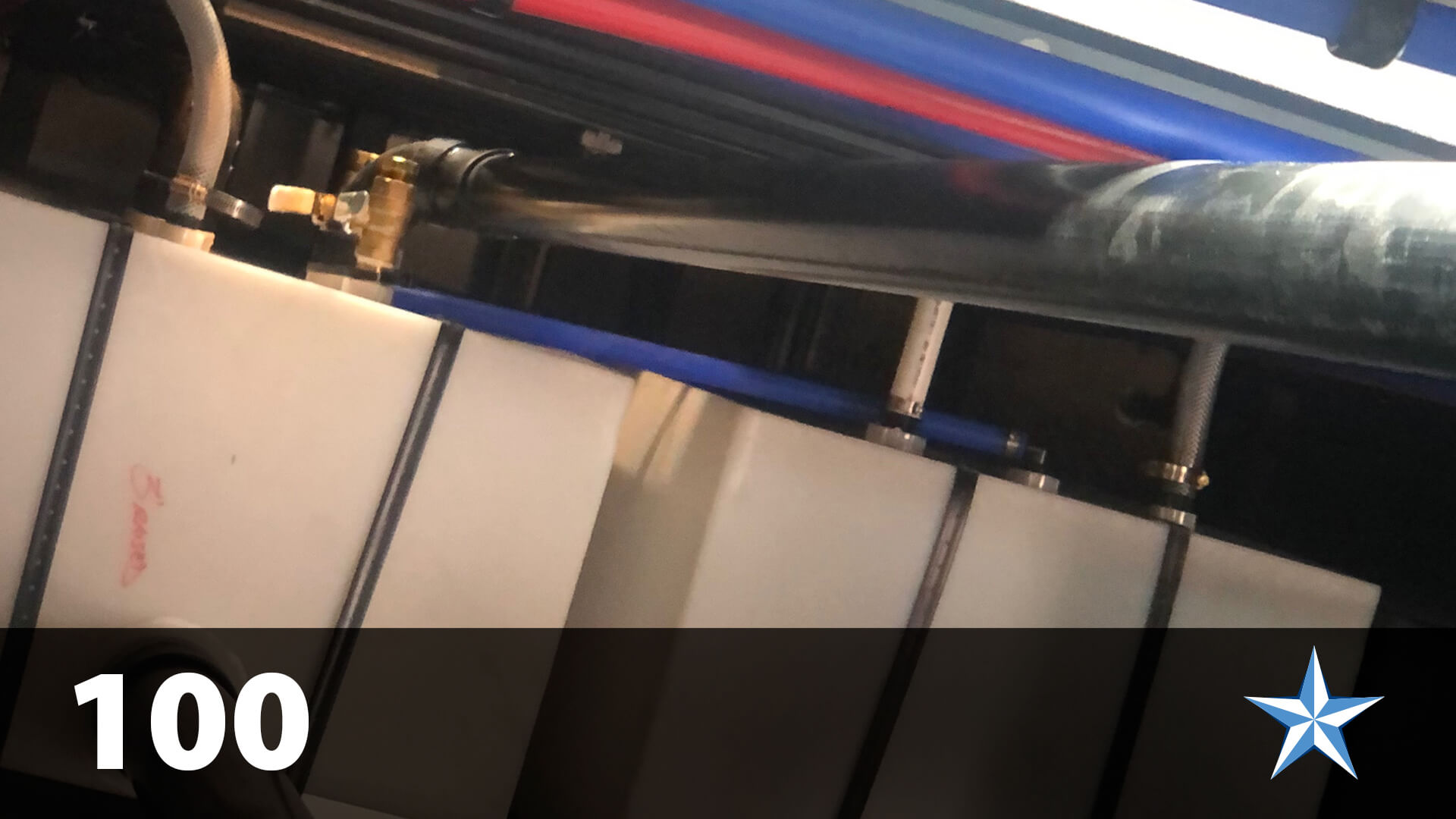 100 • Number of gallons the on-board fresh-water tank holds. External cold and hot water access can be found on both sides of the trailer for filling up water jugs or for cleaning and sanitizing. 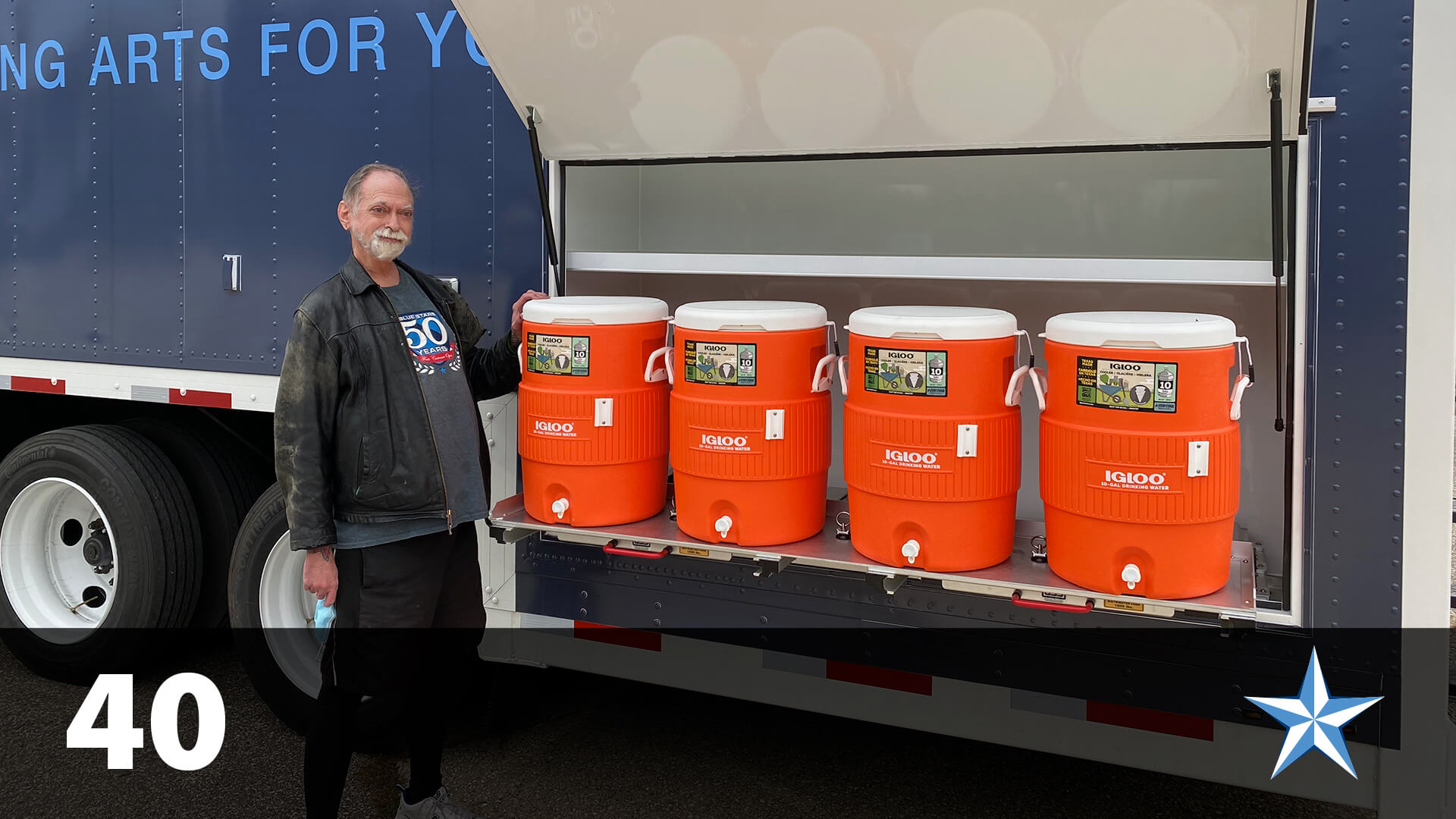 40 • Number of gallons of drinks (via four 10-gallon cooler jugs) that can be stored in the trailer’s hydration bay that operates on a slide-out shelf. The unique feature will be named after Tom Volk, a dedicated “super volunteer” who Furlano says, “makes a lot of Gatorade for us.” He stepped forward with a generous matching challenge in the final push of the trailer’s fundraising phase. Space for cup dispensers is located above the jugs to keep things in order with drains in the bottom of the bay so it can be easily hosed down and cleaned out. 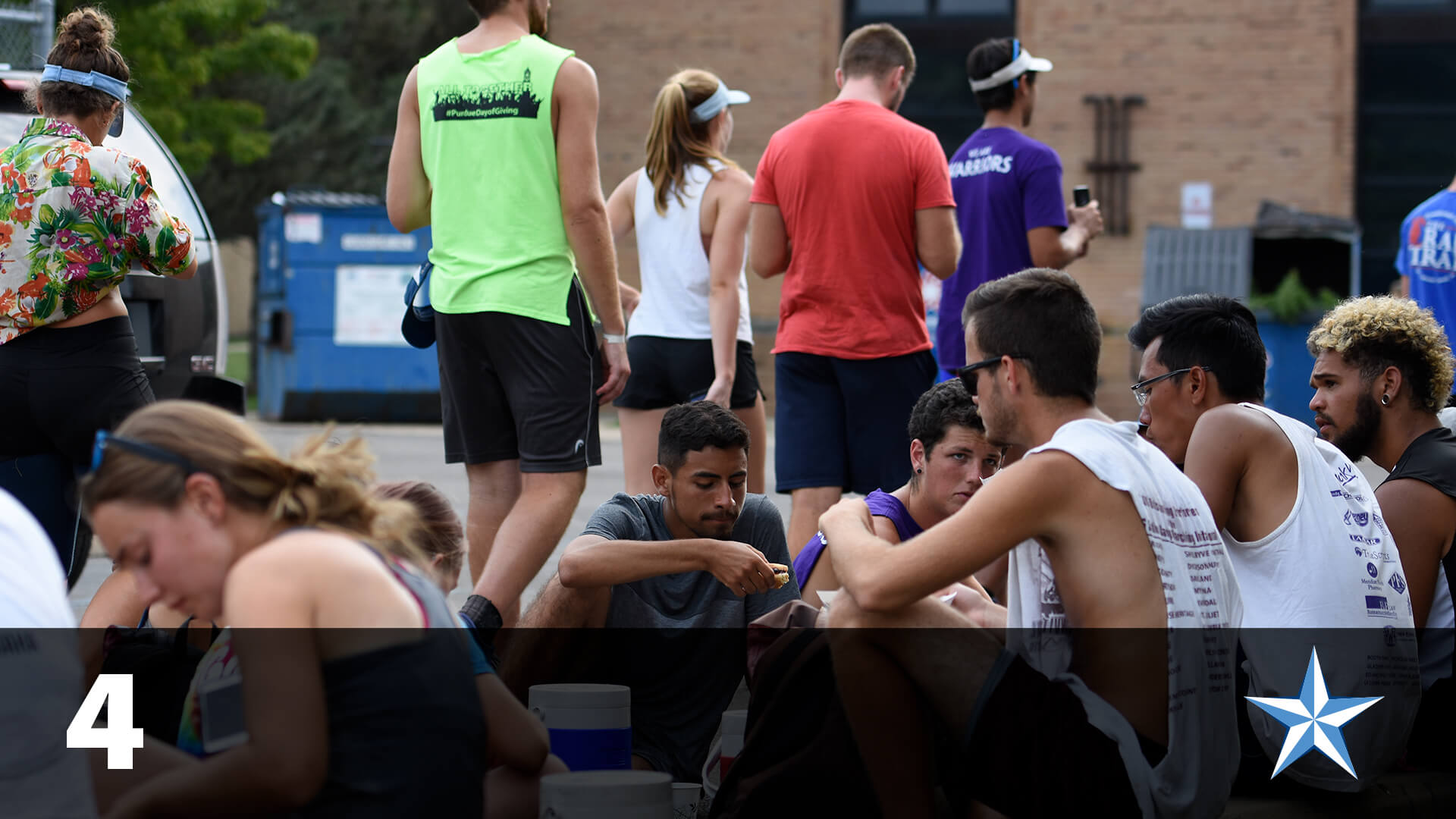 4 • Number of portable hand-washing sinks that will be an important part of keeping things hygienic and everyone healthy around mealtimes coming out of the COVID-19 pandemic and beyond. 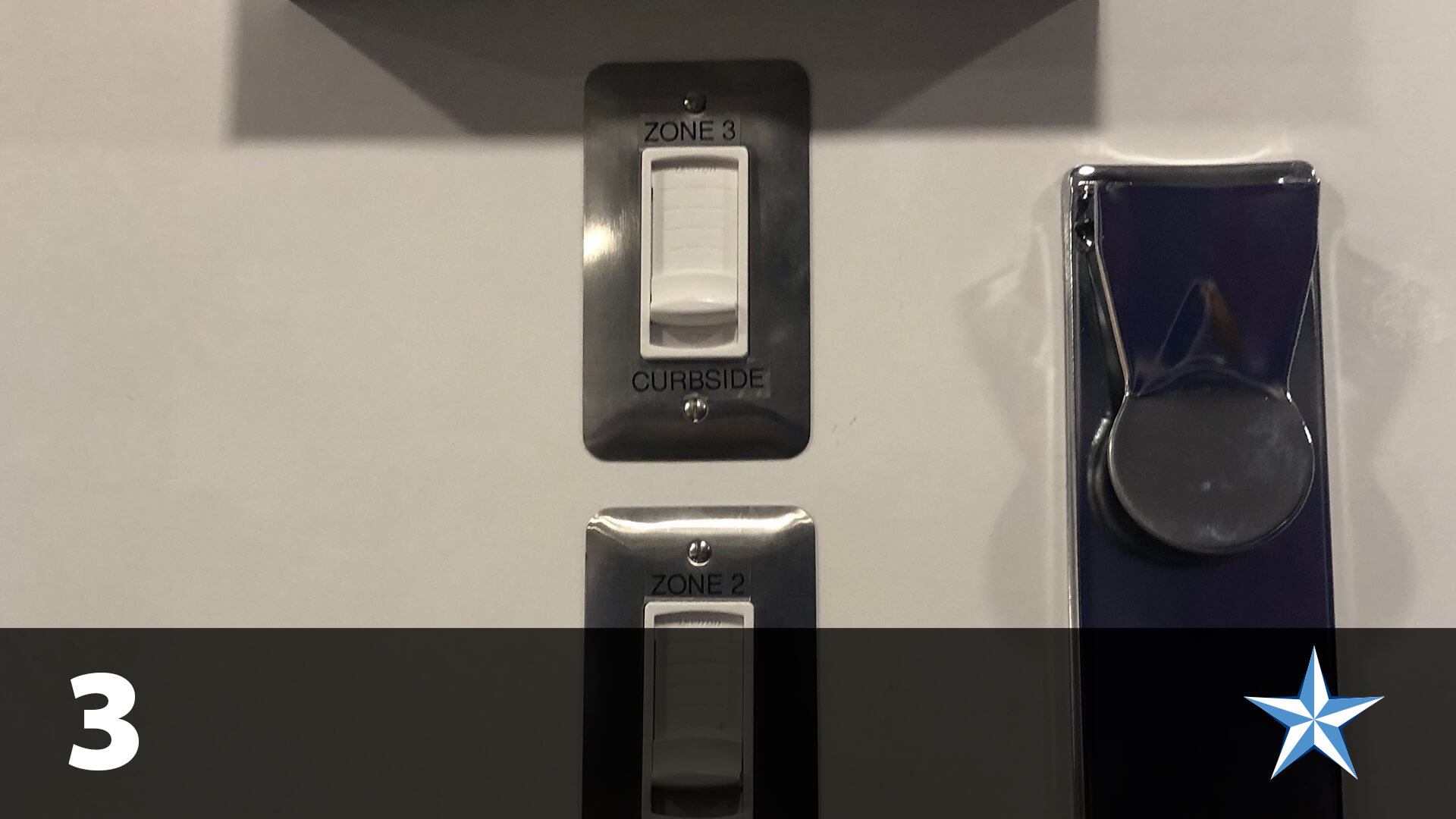 3 • Number of “zones'' of the on-board sound system, giving both cooks on the inside and/or corps members on either side of the trailer the opportunity to work and dine with their favorite tunes playing. Also setting the ambience of the Cullenary Café are 10 exterior LED scene lights to provide illumination for meals served after dark. 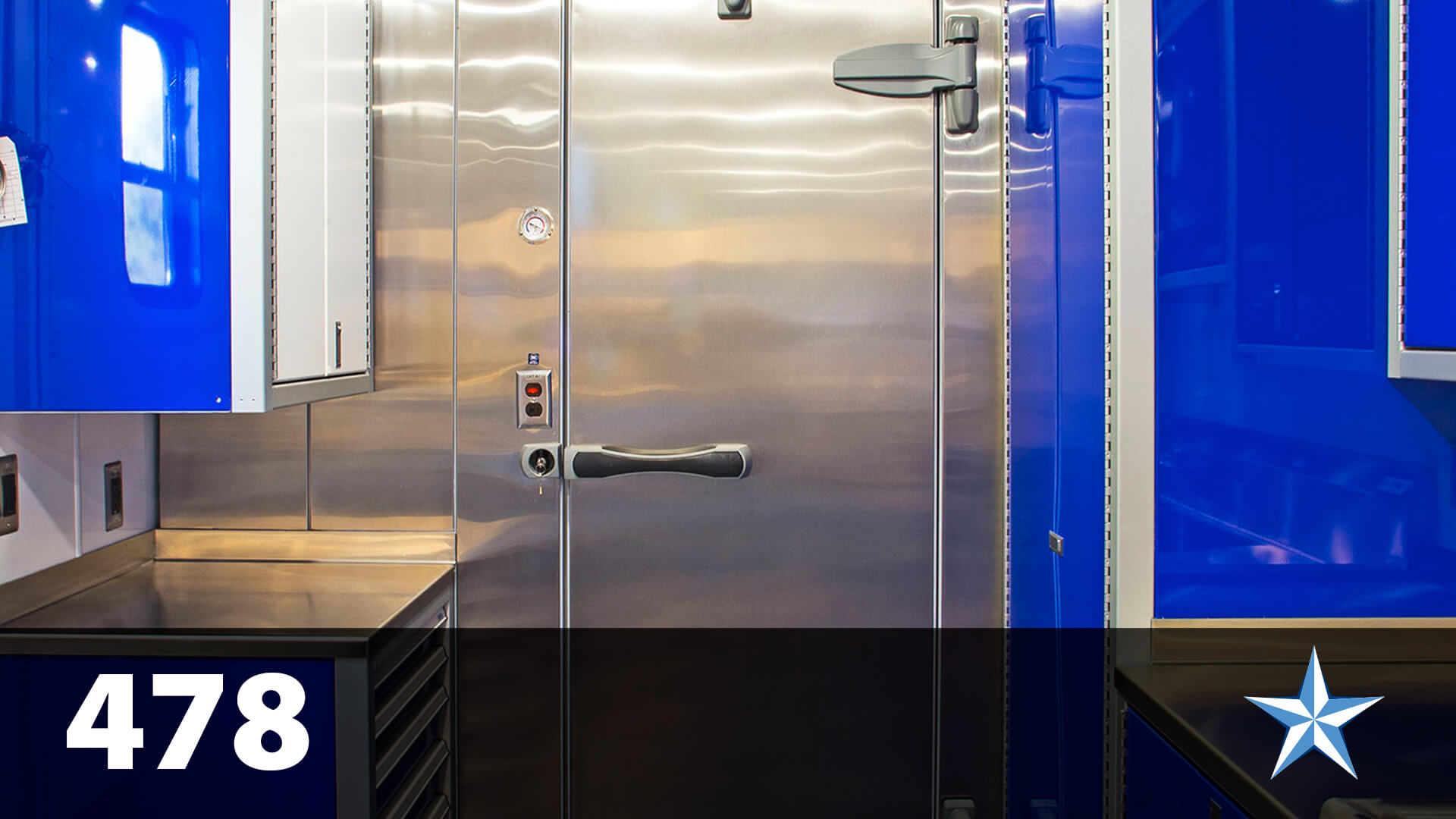 478 • Combined number of cubic feet of refrigerator (261) and freezer (217) space powered by a Carrier 950MT refrigeration unit. That’s between two and half to three times more space for perishables than the Blue Stars had in their old food truck, ensuring the corps is always stocked up and ready for chicken patty day. 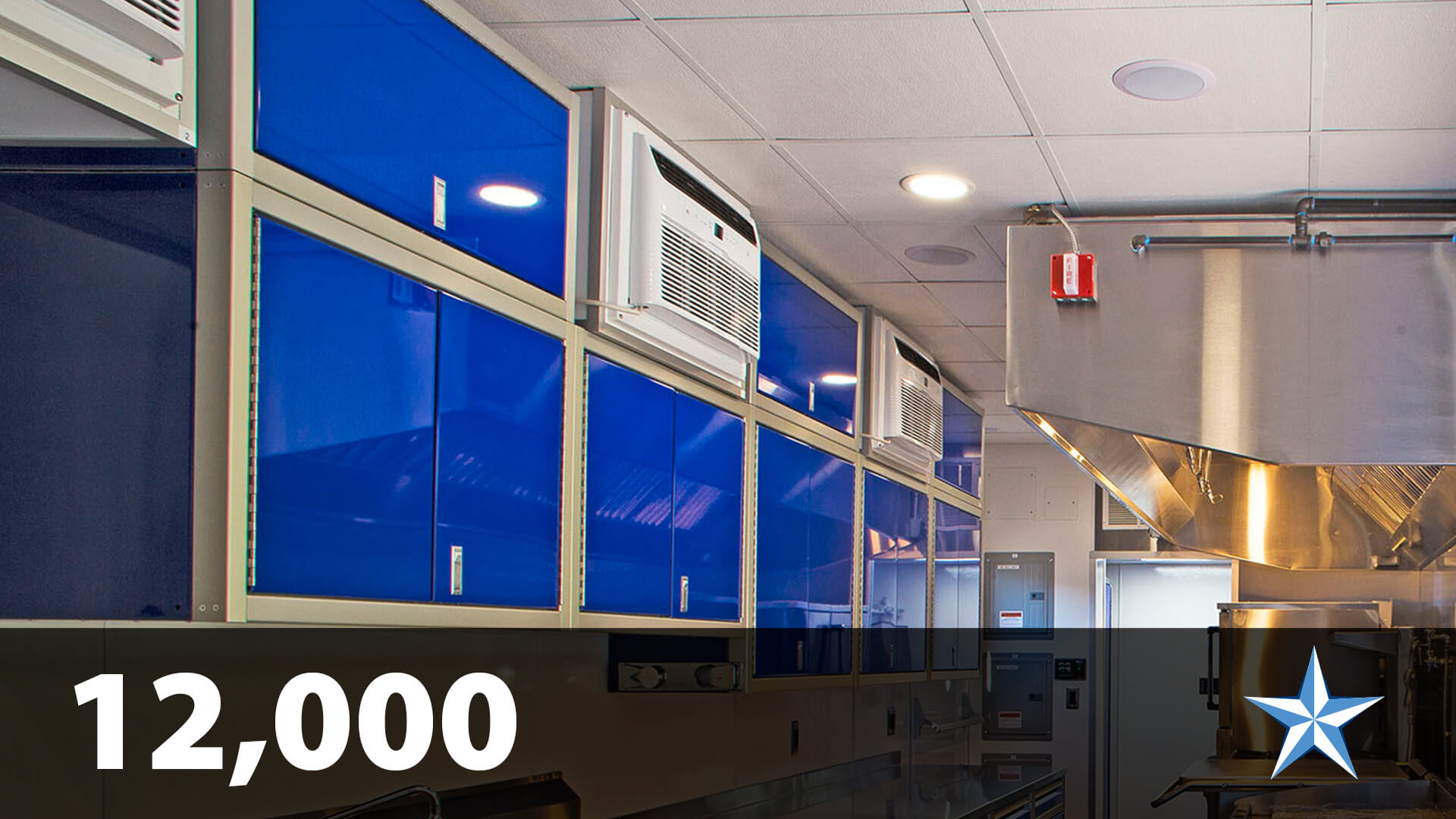 12,000 • Number of BTU of each of four on-board air conditioning units. The trailer box is fully insulated with a ceramic coating on the roof designed to reflect the sun and dissipate heat. It’s likely the old saying, “If you can’t stand the heat, get out of the kitchen,” will never be uttered inside the Cullenary Café. 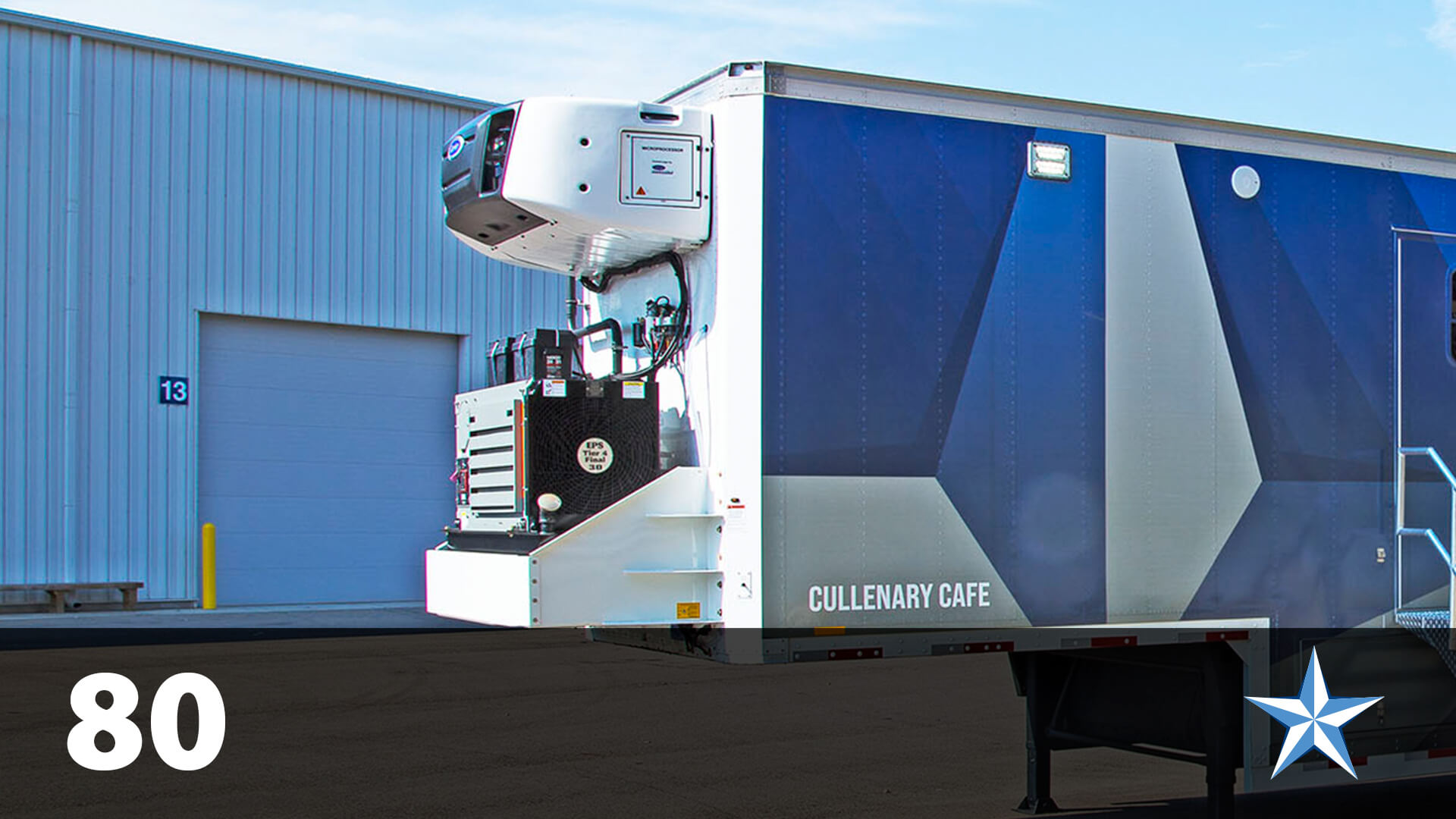 80 • Number of gallons of diesel that can be stored for the 30 kW generator, running everything from a tankless water heater to a stackable washer/dryer for laundry in the back of the trailer. 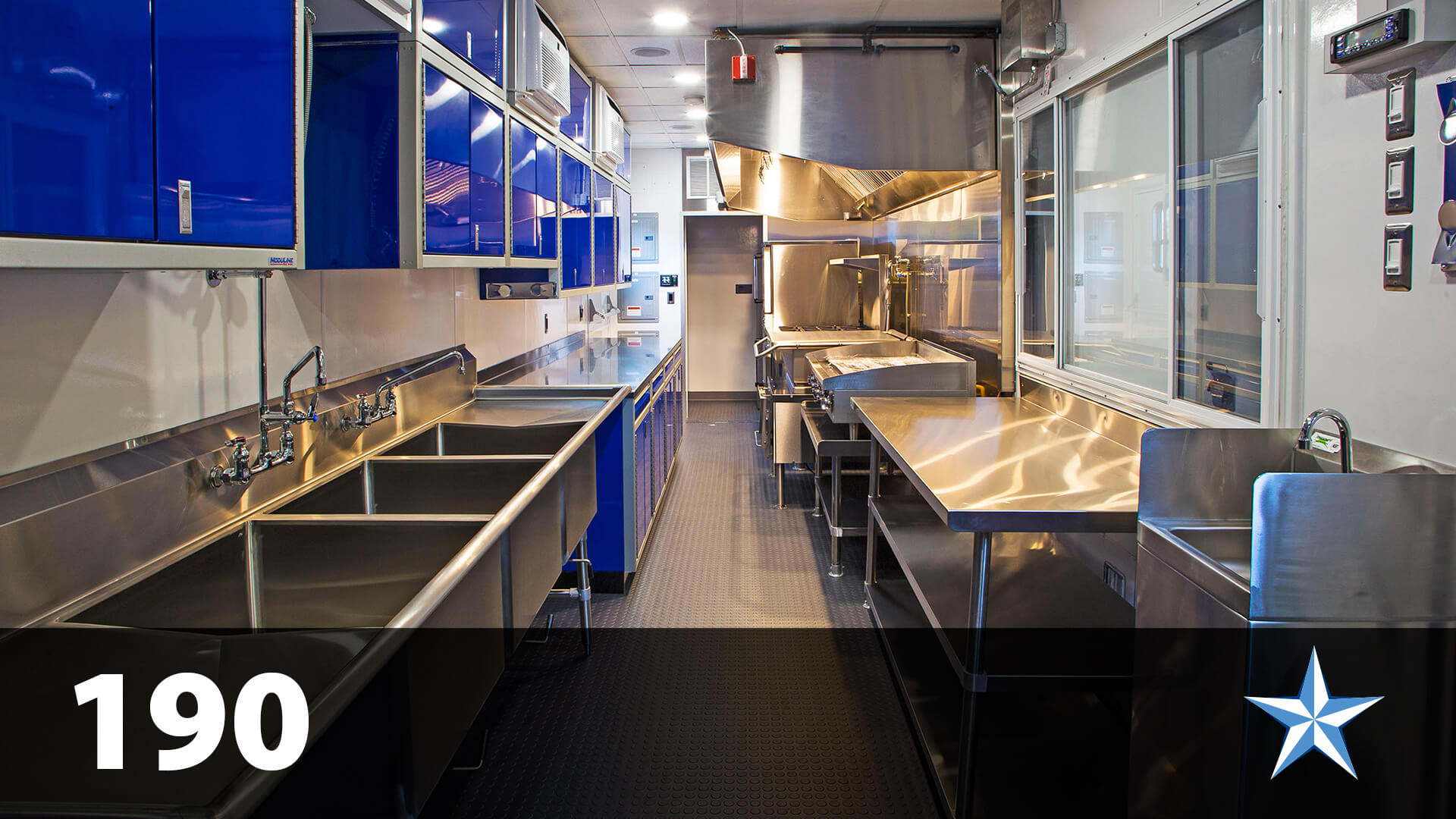 190 • Number of square feet of countertop space, all done in restaurant grade stainless steel that’s NSF certified for food service, giving plenty of workspace for everything from julienning carrots to mixing cake batter.

Learn more about the Cullenary Café