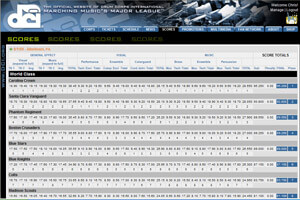 Since the Friday and Saturday shows of the DCI Eastern Classic (July 31 & Aug. 1 in Allentown, PA) are considered to be one show in two parts, the corps from both nights will be discussed here. Both nights of competition utilized the same judging panel. Let's focus today on some of the most exciting and significant scoring dynamics from a week ago at the DCI Southeastern Championship in Atlanta.

You should remembered that the two Visual Effect and two Music Effect scores are averaged before being added to the total score. Therefore, there were 10 judges, but only eight captions at stake. It should also be known that the scores of the three visual judges (Performance, Ensemble and Color Guard) and the three music judges (Brass, Ensemble and Percussion) are added together and then divided in half for the final Visual and Music totals.

Perhaps the most intriguing development after the Eastern Classic is the sudden burst by Carolina Crown to challenge the undefeated Blue Devils for the DCI World Championship title. In Atlanta, Crown was 2.75 down to BD, but in Allentown, the scores of the two corps were separated by only 0.50; a gain by Crown of 2.25 in one week. Interestingly, Crown's score in Allentown is identical to Blue Devils' score in Atlanta, meaning that while Crown picked up 2.75 in one week, Blue Devils picked up 0.50.

True, the corps performed on different nights in Allentown, but it would hard to not argue that we suddenly have a more compelling race for the championship title than we had just a week ago, when Carolina Crown hadn't yet made such a stunning burst in scoring. And, just less than a point behind Crown are the Holy Name Cadets, though Holy Name was just 0.05 behind in Atlanta.

Between the two top scoring corps, Blue Devils (Friday, 95.75) and Carolina Crown (Saturday, 95.25) had the same score for total General Effect; BD taking Visual Effect by 0.20 and Crown taking Music Effect by the same margin. In Atlanta, Crown was 5th in total Effect, 1.20 down to Blue Devils and down 0.95 in Visual Effect alone. This is a significant change in just one week. Crown's Visual Effect score this week was equal to that of both the Cadets and the Cavaliers.

Crown was down 0.35 to BD in total Visual, which is the combination of Visual Performance, Visual Ensemble and Color Guard. But last week, Crown was down 0.95, the same margin the corps had been down in Visual Effect.

Clearly, whatever happened in all the Visual captions this past week is what accounts for most of the movement in the scoring dynamics between the two top scoring corps.

Blue Devils had a 0.15 advantage in total Music, the combination of Brass, Music Ensemble and Percussion. That represents a more modest closing of the gap between the two corps, as in Atlanta the corps were separated by 0.40 in Music.

Amidst all this attention on the two top-scoring corps, it's easy to overlook the Holy Name Cadets (Friday, 94.30), down to Carolina Crown by just 0.95. The corps' strength in Allentown was total Music, just 0.40 down to BD and 0.25 down to Crown.

The Cavaliers didn't seem to lose any significant scoring ground in any particular caption; the corps just gave up a little ground to the Cadets in many captions here and there and it all added up.

Bluecoats (Friday, 91.10) lost half a point's worth of ground to Santa Clara in one week, but are only 4.65 from the top score after being 5.45 down in Atlanta. The corps was 1.55 ahead of Phantom Regiment (Saturday, 89.55), increasing its spread by a slight 0.20 from Atlanta to stay among the top six corps heading into Indianapolis next week.

Bluecoats enjoyed modest gains is all captions except Brass, which was awarded the same score attained in Atlanta. Phantom Regiment's Music Effect score slipped by 0.05 from Atlanta, as did Visual Performance. Percussion stayed at the same score, but Brass shot up by 0.90 (0.45 when added to the other Music scores and divided in half).

Troopers (Friday, 83.80) held on to the 12th highest score by the smallest margin possible over Colts (Saturday, 83.75). In Atlanta, Troopers held a 0.80 advantage. The Colts were up by 0.40 in total Effect and were down by 0.10 in total Visual. Troopers hold a 0.35 advantage in total Music, with most of that coming in the 0.60 spread in Brass. The two corps tied in Percussion.

Not far behind the corps on the bubble for a shot at the World Championship Finals, the Academy (Friday, 82.80) and Madison Scouts (Saturday, 81.10) are two of the corps that shouldn't be counted out. Academy's total Effect score was higher than that of the Troopers, and was only 0.05 behind that for Colts. Madison, down 3.35 to Troopers in Atlanta, was 2.7 down in Allentown. However, the corps' total Music score went down by 0.15 over the past week.

Crossmen (Saturday, 80.20) and Spirit (Saturday, 79.95) are attempting to hold on to the two remaining spots for the Semifinals, with the two corps switching placements from Atlanta. Crossmen's score went up by 0.80 and Spirit's by 0.35. An interesting dynamic that could affect either corps shall be examined in the next paragraph.

Mandarins (Friday, 78.85), Pacific Crest (Friday, 78.30) and Jersey Surf (Saturday, 78.05) stayed in the same order as in Atlanta. Mandarins added 2.25 to their score and Pacific Crest added 2.85. However, Jersey Surf increased its score by 4.15 in just its second full week of touring ever as a World Class corps. The corps gained 2.10 alone in total Effect over the past week. If Surf can keep up that kind of momentum, the story could be interesting come the World Championship Quarterfinals competition.

Pioneer (Friday, 74.00) and Cascades (Friday, 73.85) enjoyed slight gains in most captions. Pioneer's Visual Effect score went up by 0.80, but there was a slight drop in Visual Ensemble. Cascades went up 1.25 in total Effect and enjoyed modest increases in all captions.

View a complete recap of scores from DCI Eastern Classic day one.