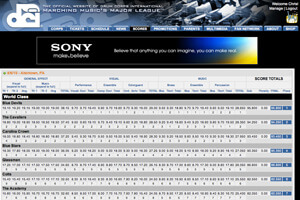 Since the Friday and Saturday DCI Eastern Classic events are considered to be one show in two parts with the same adjudication panel, the results from both days will be analyzed as one.

Like the DCI Southeastern Championship in Atlanta the weekend prior, this show was to utilize two Visual Effect and two Music Effect judges, each judge's score in each of the two captions to be added together and then divided by two. Each averaged Effect score (Visual and Music) was added together and not divided for the total General Effect score. However, it must be noted that due to the General Effect Music 2 judge arriving to Allentown late on Friday due to a cancelled flight, the scores for the GE Music 1 judge were duplicated both nights to obtain the final Music Effect score, meaning whatever score the Music Effect 1 judge gave was the same as the averaged score. (The Music Effect 2 judge still gave comments to all corps he was able to catch.)

Blue Devils (1st place – 95.80) improved their score by just 0.15 from Atlanta, but still took 1st place in Visual Effect, all three Visual captions (Performance, Ensemble and Color Guard), Brass and Music Ensemble, and were only down in Music Effect by 0.10. After being 2nd in Percussion in Atlanta by just 0.20, the line placed 5th, 0.60 down from the winning score. Last week, Bluecoats closed up the spread between the two corps from 2.35 to 1.90 and further closed up the spread this week to 1.15. However, with Bluecoats and Cavaliers both dealing with some captions in 4th and 5th place, BD still seems like a dominant favorite heading into next week's World Championships in Indianapolis.

Bluecoats (2nd place – 94.65) took 1st in Music Effect, tied for 2nd in Visual Effect, and took 2nd in Music Ensemble. Visual Performance and Percussion placed 3rd, Color Guard 4th and Visual Ensemble and Brass 5th. (Still, Brass finished only 0.40 under Blue Devils, as the top five corps in Brass were each separated by just 0.10.) What's keeping Bluecoats as high as 2nd is that they, the Cavaliers and the Cadets are sharing caption placements from 2nd through 5th, with Carolina Crown having captions in 2nd, 3rd, 4th and 6th place.

The Cavaliers (3rd place – 94.25) kept within 0.40 of Bluecoats largely by tying the corps for 2nd in Visual Effect, plus earning 2nd place finishes in Visual Performance, Visual Ensemble and Percussion. Brass and Color Guard placed 3rd, but were each just 0.20 down to Blue Devils winning scores in those captions. Keeping the corps vulnerable to lower scoring corps are the tie for 4th in Music Effect and a 5th place finish in Music Ensemble.

The Cadets (4th place – 93.65) took 2nd in Brass, just 0.10 down to Blue Devils. The next highest caption was a tie for 3rd with Bluecoats in Percussion. Both Effect captions (Visual and Music) and both Ensemble captions (Visual and Music) took 4th, Music Effect was tied with the Cavaliers. But 5th place finishes in Visual Performance and Color Guard are concerns if the corps is to break back into the top three medalist positions.

Carolina Crown (5th place – 93.45) was only 0.10 down to Blue Devils in Color Guard. Visual Effect, Music Ensemble and Visual Ensemble all took 3rd, keeping the corps in the running for the top three medals. Although Visual Performance and Brass both finished in 4th, Brass was just 0.30 under Blue Devils' winning caption score. Holding this corps back is 6th place scores in Visual Effect and Percussion, the Visual Effect score accounting for 0.50—half a point—of the total score deficit to both Bluecoats and the Cavaliers.

Phantom Regiment (6th place – 91.30) won Percussion after placing 3rd in that caption in Atlanta. The corps was no higher than 6th in any other caption, including 8th in Visual Effect, 9th in Color Guard and was tied for 9th in Visual Ensemble.

Santa Clara Vanguard (7th place – 90.90) was 5th through 9th in all captions except Percussion, where the corps placed 11th. While the corps enjoyed a 0.65 advantage over Phantom Regiment in Visual Effect (which isn't divided in half), the 2.30 deficit in Percussion (remember that represents a 1.15 difference in total score) was too much for the corps to overcome Phantom Regiment for a top 6th placement, especially considering the corps finished only 0.40 behind Regiment in total score.

Blue Stars (8th place – 90.35) tied with Phantom Regiment for 6th in Visual Performance, and was 7th in all other captions except for 8th in Music Effect and Music Ensemble.

Boston Crusaders (9th place – 89.00) was 8th or 9th in all captions except Visual Effect, which was 10th. The corps closed the 2.75 spread between them and Blue Stars in Atlanta to 1.35 by tying Cascades for the biggest score increase from Atlanta, 2.85.

Madison Scouts (11th place – 87.50) were 9th in Visual Effect and 10th in Music Effect and Color Guard, placing 11th or 12th in everything else. A 1.00 deficit to Blue Knights in Percussion accounted for 0.50 of the total score; of interest as the corps was just 0.30 behind Blue Knights in total score.

Crossmen (16th – 80.30) took 13th in Color Guard, 14th in Visual Effect 15th in Percussion and 16th in Music Ensemble, but were pulled down to 17th after finishing 19th in Music Effect and 18th in the other three captions.

Pacific Crest (18th – 79.40) finished in Atlanta between 17th and 19th in all captions, but soared to 13th in Visual Effect and dropped to a tie for 20th in Music Effect. Music Ensemble was 18th and all other captions finished in 17th. It would have been interesting to see if the missing second Music Effect judge's scores might have resulted in more of a contest for the last spot in the 17-corps Semifinals at the World Championships.

Jersey Surf (21st – 75.85) had its highest caption placement at 19th in Visual Effect and its lowest at 23rd in Visual Ensemble. Other captions were 20th or 22nd.

Cascades (22nd – 74.85) tied for 20th in Music Effect but were 23rd in Percussion. All other captions were 21st or 22nd. Along with Boston Crusaders, the corps added the most to its Atlanta score than any other corps (2.85).