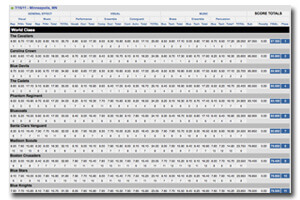 The DCI Minnesota Premier Event on Saturday, July 16, was the first major get together for all but five of the 23 World Class corps. (The Academy, Pacific Crest and Mandarins will be at the DCI Southwestern Championship in San Antonio next weekend and all major shows afterward, as will Pioneer, who was in the midst of their 50th Anniversary celebration this weekend. Jersey Surf will be at the DCI Southeastern Championship a week later in Atlanta and other shows for the rest of the season.)

When the dust settled, it was The Cavaliers (1st-87.35), 1.40 ahead of 2nd place Carolina Crown and 1.45 ahead of 3rd place Blue Devils. Cavaliers won six of the eight captions, coming in 2nd to the Cadets in Visual Ensemble by 0.20 and 2nd to Crown in Brass by the same margin. Despite the overall spread, Cavaliers were never more the 0.20 ahead of the 2nd place corps in any caption. What made the spread possible is the 2nd place corps in the other captions were also as low as 6th in some other captions. If any one other corps in the upper level of corps tighten up their other captions, that margin could easily shrink.

Please note that only the General Effect scores are added toward the final score without being divided in half. All the other captions are divided in half, so when it is mentioned that one corps' caption (other than GE) was 0.80 down to another corps' caption score, it really means that spread was worth 0.40 in the final overall score.

Blue Devils (3rd-85.90) took 2nd in Visual Performance, Color Guard and Percussion, all three captions just 0.10 under the Cavaliers. GE Visual and Music Ensemble both placed 3rd and GE Music and Brass 4th, both those captions 0.50 under the scores of the winning captions.

The Cadets (4th-85.55) won Visual Ensemble. No captions finished in 2nd, and GE Music, Color Guard and Brass all finished in 3rd. GE Visual and Visual Performance finished 4th, 0.50 and 0.70 out from 1st, respectively. Music Ensemble and Percussion finished 5th, 0.60 and 0.50 out.

When you look at the caption placements of Carolina Crown, Blue Devils and the Cadets, it's apparent that they are staying so close to one another score-wise because one's strengths is the others' weaknesses, and vice-versa.

Phantom Regiment (5th-83.10) was behind the three-corps block in 2nd, 3rd and 4th largely due to a 7th place finish in Percussion and an 8th place finish in Visual Ensemble. Color Guard and Music Ensemble each held close to the pack in 4th place, but 5th in both GE captions, accounting for an overall 0.80 deficit to Blue Devils, the corps that was 4th in combined GE. Visual Performance was 6th. That 8th place in Visual Ensemble was due to placing 11th in the Composition sub-caption, which brought down the 6th place in the Excellence sub-caption.

The highlight for Santa Clara Vanguard (7th-80.85) was 3rd place in Percussion, only 0.30 under the Cavaliers. This was seriously countered by an 11th place finish in GE Music, 2.50 under the Cavaliers in a caption that isn't divided in half before being added to the final score. Visual Ensemble and Color Guard placed 5th, GE Visual and Visual Performance 7th, and both Brass and Music Ensemble placed 9th, the latter under the overall 11th place finisher Blue Knights.

Madison Scouts (8th-79.85) broke into the top eight corps, with Visual Ensemble, Color Guard and Music Ensemble placing 7th. GE Music, Visual Performance and Brass all placed 8th. The corps stayed in 8th despite a 10th place finish in GE Visual and a 12th place finish in Percussion, the latter 2.40 under the winning caption score and 0.30 under 14th place Glassmen.

Boston Crusaders (9th-79.40) are close behind Scouts due to having a 0.70 advantage in Total GE. Percussion was 8th, 0.90 above the Scouts. However, Color Guard finished in 10th, Visual Performance, Visual Ensemble and Brass ended in 11th and Music Ensemble placed 12th, each 0.50 to 0.70 under Madison.

Blue Stars (10th- 78.85) are fighting off Blue Knights, with only the 7th placement in Brass and 11th in Color Guard being more than 0.20 away in either direction from BK. The high point was 7th in Brass. Both GE captions placed 9th, as did Percussion. Visual Performance, Visual Ensemble and Music Ensemble ended in 10th.

Blue Knights (11th-78.50) were 8th in Music Ensemble, 9th in all three Visual captions (Performance, Ensemble and Color Guard), 10th in GE Music, Brass and Percussion, and 11th in GE Visual. Despite being 11th in just one caption and higher in everything else, the corps' strengths were its closest competitors' weaknesses and vice-versa.

Troopers (12th-74.70) popped into the top 12 despite being within the top 12 in just one caption, Music Ensemble (11th). This is the most intriguing example of how strengths in one corps are weaknesses in another. Visual Ensemble finished 14th and Brass 15th, and the remaining five captions finished 13th.

Glassmen (14th-74.30) took 11th in Percussion and 12th in GE Music. Visual Ensemble and Brass were 13th, and GE Visual and Music Ensemble finished in 14th. Visual Performance ended in 15th, but it was the 16th place finish in Color Guard, 1.00 under Spirit of Atlanta, that was mostly responsible for the 0.15 deficit in total score to Spirit of Atlanta.

Colts (15th-73.25) placed between 14th and 16th in all captions; 14th in GE Music, Color Guard and Brass, 15th in Music Ensemble, Visual Ensemble and Percussion, and 16th in GE Visual and Visual Performance.

In Open Class, Legends (1st-66.75) took 1st in all captions except for GE Visual and Color Guard, which both placed 2nd.

Colt Cadets (2nd-65.45) placed 2nd in all captions except for 1st place finishes in the two captions in which Legends were 2nd.

Racine Scouts (3rd-52.50) were 3rd in all captions except for 4th place in Color Guard.

Blue Saints (4th-44.05) finished 4th in every caption except for 3rd place in Color Guard.

The two All-Age corps, Minnesota Brass (1st-78.90) and Governaires (2nd-74.85) were judged on criteria used for DCA shows and consequently did not appear on the official DCI recaps.