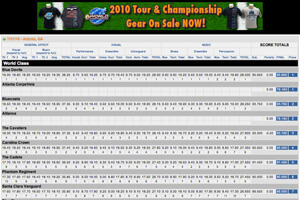 At the DCI Atlanta Southeastern Championship Presented by Lake Oconee and Greene County, GA, seven of the top eight corps from the night before in Murfreesboro received higher scores than the previous night's show in Murfreesboro, Tenn. The lone exception was the Cavaliers, who earned the exact same score.

Also of note is that the two days of the San Antonio DCI Southwestern Championship is considered as one single contest. Therefore, score or placement comparisons between corps from the two different nights with what happened at the Atlanta show are considered to be valid.

Blue Devils (1st place – 95.65) took all captions and sub-captions except for Percussion, which placed 2nd by 0.20. The corps won total Effect, total Visual and total Music and maintains a 1.90 spread over 2nd place, the same spread enjoyed over The Cavaliers in San Antonio a week ago. From the Southwestern Championship, Bluecoats closed up the score between the two corps from 2.35 to 1.90, but BD still seems as dominant as ever.

Bluecoats (2nd place – 93.75) scored 0.90 behind Blue Devils in total Effect, tying for 3rd with The Cavaliers. The corps tied The Cavaliers for 2nd in total Visual, 0.75 behind BD, and took 2nd in total Music, just 0.25 under BD. Once again, the corps won Percussion, but fell to 4th in Music Ensemble. A 4th place finish in averaged Visual Effect and 4th in Visual Performance were the only other captions that placed lower than 2nd.

The Cavaliers (3rd place – 93.10) stayed in 5th place in Music Ensemble, despite the caption score going up 0.60 from the night before. The 4th place score in Music Effect offset the 2nd place score in Visual Effect. Though only a 0.30 difference separated the scores from the two Music Effect judges, one had the corps in 5th and the other in 2nd.

Carolina Crown (4th place – 92.55) still has issues to address in the Music captions, taking 5th place in Brass and 7th in Percussion. Despite that, Music Ensemble took 2nd, only 0.20 behind Blue Devils. The corps took second in total Effect by a scant 0.05 and fell from 3rd in Visual Ensemble in Murfreesboro to 5th, even though the caption score dropped by just 0.10.

The Cadets (5th place – 91.45) took 5th in total Effect and total Visual and 4th in total Music. A 7th place finish in Color Guard was the corps' weakest caption, falling to both Santa Clara Vanguard and Blue Stars, but beating Phantom Regiment by 0.40. The corps' brightest spot was 3rd in Music Ensemble, just 0.30 behind Blue Devils' winning score in that caption. (Remember to divide those caption scores in half to see how they affected the overall score.)

Phantom Regiment (6th place – 90.00) closed the overall gap with The Cadets from 2.15 to 1.90 in one night. One Visual Effect judge had the corps in 6th and the other in 10th. The total Visual placement of 8th and the 7th in Brass are currently holding the corps back from gaining on The Cadets, but Percussion is maintaining a strong 3rd place, only 0.30 behind Bluecoats.

Santa Clara Vanguard (7th place – 89.55) took 10th in Percussion, losing that caption to Blue Stars, Boston Crusaders and Glassmen. The corps' 0.45 deficit to Phantom Regiment is more than due to a 0.80 deficit in total Music alone, mostly from the difference between the corps' 10th place in Percussion to Regiment's 3rd. The night before, the corps beat Regiment and also had a higher score in San Antonio.

Boston Crusaders (9th place – 86.15) took 11th in total Effect, the 11th place in Music Effect pulling down the 9th place in Visual Effect. A 9th place finish in total Visual (9th in Performance and Ensemble and 10th in Color Guard) and a 9th place in total Music (8th in Brass and Percussion and 9th in Ensemble) account for why the corps is sitting just 0.40 above Blue Knights.

Blue Knights (10th place – 85.75) took 10th in total Effect and total Music and 11th in total Visual, tying Crusaders for 9th in Visual Performance. While gaining on the 9th place group, the corps is now only 0.20 above the Madison Scouts after being 2.35 ahead in total score in San Antonio.

Madison Scouts (11th place – 85.55) gained 4.00 in total score from San Antonio, the highest of all corps except for The Academy, which also gained exactly 4.00. Now 1.25 above Glassmen after being 0.30 behind in San Antonio, the corps is making its biggest strides of the season and is threatening to knock off Blue Knights.

Glassmen (12th place – 84.30) is now 1.70 above The Academy, after being 3.25 above the corps in San Antonio effectively closing the gap by 1.55 in one week. The 9th place in Percussion was the corps' bright spot, as other than the 11th place in Visual Performance, all other captions finished in 12th or 13th.

The Academy (13th – 82.60) has hopes of sneaking into the World Championship Finals for the first time as a World Class corps, but only provided if the corps keeps its momentum going. However, the only captions to place in the top 12 were Visual Performance (12th) and Brass (11th). Total Effect placed 14th, Color Guard was 15th and so was Music Ensemble.

Troopers (15th – 81.60) took 14th in total Visual and 15th in total Effect and total Music. The Music placement is made up of an 18th place in Percussion balanced by 12th place in Music Ensemble.

Pacific Crest (18th – 77.85) was fairly consistent across the board, placing between 17th and 19th in all captions.