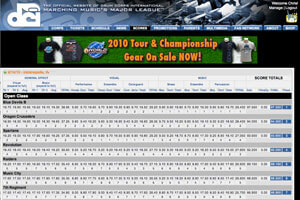 To better understand the scoring process, please know that Open Class Finals utilized two Visual Effect and two Music Effect judges, with each judge's score (maximum 20 points) in each of the two captions added together and then averaged, for a maximum of 20 points. Each averaged Effect score (Visual and Music) was added together and then not divided for the total General Effect score. That means a total of 40 points are awarded for General Effect.

The three Visual captions (Performance, Ensemble and Color Guard) and the three Music captions (Brass, Ensemble and Percussion) each get 20 points on the judges' sheets, are first added together and then divided in two for the total Visual and total Music score. (This is done so the judges can work with tenths of a point rather than half of tenths, which would necessitate them to carry out their scores to two decimal places.) That means the three Visual and the three Music captions contribute up to 10 points each towards the final score.

Every caption is further divided into two sub-captions to help each judge focus on the specifics on their sheets. The following explanation is a gross oversimplification of the process: Both Visual Effect and Music Effect are divided into sub-captions for Repertoire (the quality of the design and its effect) and Performance (how well the corps presents the visual and music designs). Visual Performance is divided into Technique (training) and Excellence (quality of individual performance), Visual Ensemble is split into Composition (achievement of content) and Excellence (quality of performance by the entire corps) and Color Guard includes Content (challenge) and Achievement (accomplishment). All three Music captions are broken down by (level of) Musicianship and (quality of) Technique. Please remember the above is greatly simplified, and many judges would likely provide interpretations much different than my own.

The big news from Finals is that there wasn't any big news. Blue Devils "B" walked away with the competition, as they had in Quarterfinals and Semifinals, and there were two minor switches of placements from Semifinals; Raiders passed up Music City by turning a 0.40 deficit into a 0.65 advantage and Legends went from being 0.70 under 7th Regiment to finishing 0.65 above. All corps except Velvet Knights went up in score, with VK dropping 0.50.

Blue Devils B (1st place - 97.55) won the awards for Best Brass Performance, Best Percussion Performance, Best General Effect and Best Visual Performance. The corps won six of eight captions, placing 2nd in Color Guard to Spartans by 0.30 and 2nd in Visual Ensemble to Spartans by 0.20. (Remember to divide those caption scores in half. One the two Effect captions aren't divided.) Some margins were large, such as the 1.60 in total Effect (the combination of Visual Effect and Music Effect), due to a 0.55 spread over Spartans in Visual Effect and a 0.65 spread over Oregon Crusaders in Music Effect). Other large spreads were seen in Brass (0.60 over Crusaders) and Percussion (0.70 over Revolution).

Oregon Crusaders (2nd place – 94.00) took 2nd in Music Effect, Visual Performance, Brass and Music Ensemble, 4th in Color Guard and 3rd in all other captions. Though behind Spartans by 0.10 in total General Effect and 0.85 down 0.85 in total Visual, the corps stayed in 2nd by 0.40 on the basis of enjoying a whopping 1.35 advantage in total Music, mostly due to a 1.80 spread in Music Ensemble that represented 0.90 in the final score.

Spartans (3rd – 93.60) took the award for Best Color Guard Performance and placed 1st in Visual Ensemble. 2nd in Visual Effect and 3rd in Music Effect, Visual Performance and Brass and 4th in Percussion, the corps' final score was pulled down by a 7th place finish in Music Ensemble, discussed in the paragraph above.

Revolution (4th – 92.20) took 2nd in Percussion, 3rd in Brass, 5th in Color Guard and 4th in everything else. The corps' 4.15 increase in score from Semifinals was the largest of any finalist corps, besting the increase of 3.25 by Spartans and 3.15 by Raiders.

Raiders (5th – 89.15) took 3rd in Color Guard and 4th in Music Ensemble, 5th in Visual Effect and Visual Ensemble and 6th in all other captions. Slight exchanges in positions in a number of captions with Music City allowed the corps to move up from 6th in Semifinals.

Music City (6th – 88.50) took 5th in Music Effect, Brass and Music Ensemble, 8th in Visual Performance and 6th or 7th in everything else.

7th Regiment (7th – 86.90) was 6th in Visual Ensemble, 8th in Brass and Percussion, 9th in Music Ensemble and 7th in all else. The corps passed up Legends mostly due to an increase of 1.25 in total Visual, primarily due to the 1.90 increase in the Visual Performance score, worth 0.95 of that 1.25 total Visual increase.

Legends (8th – 86.20) took 5th in Visual Performance and Percussion, 6th in Music Ensemble, 7th in Brass and 8th or 9th in the remaining captions.

Forte (10th – 82.90) took 8th in Color Guard and 9th in Visual Performance and Percussion, 11th in Visual Effect and 10th in the remaining captions.