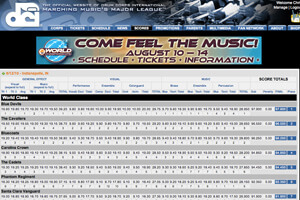 Quarterfinals, as will the remaining two World Class World Championship events, utilized two Visual Effect and two Music Effect judges, with each judge's score in each of the two captions added together and then divided by two. Each averaged Effect score (Visual and Music) was added together but not divided for the total General Effect score.

The big news from Quarterfinals is that The Cavaliers passed up the Bluecoats for 2nd place, Carolina Crown passed up The Cadets for 4th place, Madison Scouts passed up Blue Knights for 10th place, Spirit passed up Crossmen for 16th place, and Pacific Crest came within 0.45 of making the Semifinals at Crossmen's expense.

At Quarterfinals, all corps except Cascades and Jersey Surf improved their score from the DCI Eastern Classic in Allentown the previous weekend.

Blue Devils (1st place – 97.90) took all captions except Percussion, in which they placed 4th, 0.60 down to Phantom Regiment's winning score, also placing under Bluecoats and The Cavaliers. Color Guard scored a perfect 20. (Remember that translates to 10.00 points in the total score.) Last week in Allentown, the guard had a 19.00, but since they only enjoyed a 0.30 spread over the 2nd place Bluecoats guard, (who was 0.85 down in 2nd last week), guard scores on average went way up this week. Although the Cavaliers' score of 96.55 was higher than BD's score last week of 95.80, Blue Devils—with a spread Thursday of 1.45—still appear to be rolling to their 14th World Championship.

The Cavaliers (2nd place – 96.55) were 2nd in Visual Effect, Visual Performance, Visual Ensemble and Brass, 3rd in Color Guard, Music Ensemble and Percussion and tied for 4th in Music Effect, (under Carolina Crown from both Music Effect judges). Looking at all the caption placements and score differentials between Allentown and the Quarterfinals, it's very difficult to see how the Cavaliers passed up Bluecoats, but that's how the numbers work out sometimes.

Bluecoats (3rd place – 96.25) tied Blue Devils for 1st in Music Effect, were 2nd in Color Guard, Music Ensemble and Percussion and took 3rd in Visual Effect. Holding them back was 4th place finishes in Visual Performance and Brass and 5th place in Visual Ensemble. The corps is still on its way to getting its first top-three medal at the World Championships.

Carolina Crown (4th place – 94.85) placed 3rd in Music Effect, Visual Performance and Visual Ensemble and Brass, took 4th in Color Guard and Music Ensemble, but took 5th in Visual Effect and fell to 6th in Percussion after taking 3rd in Allentown. With a 1.40 deficit to Bluecoats in total score, unless something dramatic happens, the corps is looking to place out of the top three.

The Cadets (5th place – 94.45) placed out of the top three in every caption, placing 4th in both Effect captions (tying Cavaliers in Music Effect) and Visual Ensemble. Music Ensemble took a hit at 7th place, down from 4th in Allentown, dropping 0.30 from the DCI Eastern Classic. All other captions placed 5th.

Phantom Regiment (6th place – 92.35) won Percussion once again, but dropped to 10th from 6th last week in Visual Ensemble. All other captions finished in 6th or 7th.

Santa Clara Vanguard (7th place – 91.90) is staying under Phantom Regiment largely on the basis of their 10th place Percussion line, which scored a full 2 points under Regiment's line. That represents 1.00 of the corps' total score.

Boston Crusaders (9th place – 89.75) slipped in placement in a few captions. Last week, they were 8th or 9th in all captions except for 10th in Visual Effect. At Quarterfinals, the corps was 10th in Music Ensemble and Color Guard and 11th in Brass and Percussion, slipping to just 0.60 above Madison Scouts in total score after being 1.50 above in Allentown.

Madison Scouts (10th place – 89.15) had the biggest gain in total score from Allentown, 1.65. That allowed the corps to move from 0.30 behind Blue Knights to 1.75 in front. The corps seems to be in rapid ascent and now has its eyes set on Boston Crusaders. (In comparison, Crusaders picked up 4.10 from San Antonio three weeks ago to Scouts' 7.60, while Blue Knights picked up 4.50.)

Crossmen (17th – 80.80) slipped a position from Allentown, but managed to hold off Pacific Crest for the last position in the Semifinals. The bright spot was 15th in Color Guard, with all other captions in 17th or 18th.

Pacific Crest (18th – 80.35) was 17th or 18th in all captions. The 0.50 deficit to Crossmen in Visual Effect called who made Semifinals, especially since the corps surpassed Crossmen in four captions.

Jersey Surf (21st – 75.70), scoring 0.15 under their Allentown score, was 20th in Color Guard and Music Ensemble, 22nd in Visual Ensemble and 21st in all other captions except for 23rd in Visual Performance.

Contributing to this report: Jayme Krizanich