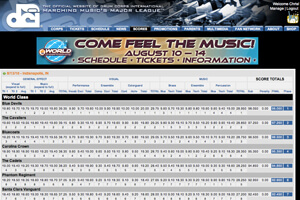 There wasn't a lot of big news to come out of Semifinals, and every corps finished in the same placement as the Quarterfinals.

In Semifinals, the only top-12 corps to not increase their scores were Boston Crusaders, Blue Knights and Glassmen. All non-finalist corps except the Crossmen went down in score from Quarterfinals.

View the complete scoring recap from the World Class Semifinals.

Blue Devils (1st place – 98.05) again took all captions except Percussion, in which they placed 4th, 0.70 down to Phantom Regiment's winning score, and also placing under Bluecoats and the Cavaliers. Color Guard once again scored a perfect 20.0. (Remember that translates to 10.00 points in the total score.) Until tonight, barring a meteor piercing the roof of Lucas Oil Stadium during BD's show tomorrow, one would be safe to bet the mortgage that the corps will earn its 14th World Championship. But if the corps' score doesn't move up Saturday and The Cavaliers have another 0.70 jump in one night, we could have a much closer contest than we've been expecting.

The Cavaliers (2nd place – 97.25) turned it on in Semifinals and added that 0.70 to their Quarterfinals score. The corps tied BD for the top score in Music Effect, 19.60. Although Brass took 3rd, the line was only 0.20 behind BD's winning Brass line. Visual Effect took 2nd, as did Visual Ensemble, Color Guard and Percussion. Visual Performance and Music Ensemble finished in 3rd.

Bluecoats (3rd place – 96.50) added 0.25 from Quarterfinals, taking 2nd in Visual Performance and Brass. The Visual Effect score, 0.40 down to Cavaliers, is the only score that really pulled the corps down from 2nd place. All other captions that were under Cavaliers were still pretty close. Music Ensemble was the only other caption to place 4th, with all other captions in 3rd. With a 1.15 advantage over 4th place, it appears the corps is easily heading toward its first-ever Finals finish in the top-three.

Carolina Crown (4th place – 95.35) added 0.50 to the Quarterfinals score, earning 2nd place in Music Ensemble, (the only caption to place in the top-three). Except for 6th place in Percussion, every other caption placed 4th or 5th. Though 0.30 down to The Cadets in Visual Effect, the corps' 0.40 advantage in Music Effect and mostly minor spreads one way or the other in other captions kept the corps above The Cadets.

The Cadets (5th place – 94.45) didn't move up on Crown even though the corps scored 0.40 higher than the night before. Visual Effect took 3rd, but all other captions finished in 5th.

Phantom Regiment (6th place – 92.95) added 0.60 from Quarterfinals and once again won Percussion. The next highest caption was 6th in Music Effect, with all other captions (other than 8th in Visual Effect) finishing in 7th.

Santa Clara Vanguard (7th place – 91.90) added 0.55 to the total score, with the Percussion moving up from 10th to 7th. Brass and Music Ensemble took 8th, with all other captions either 6th or 7th.

Blue Stars (8th place – 92.05) added 0.40 from Quarterfinals, but since SCV and Regiment had similar advances, there was no movement between 6th, 7th and 8th overall. Lowest placement was 10th in Percussion and 9th in Color Guard, with other captions between 6th and 8th.

Boston Crusaders (9th place – 89.60) slipped 0.05 from Quarterfinals and was 9th or 10th in every caption except for 8th place in Percussion.