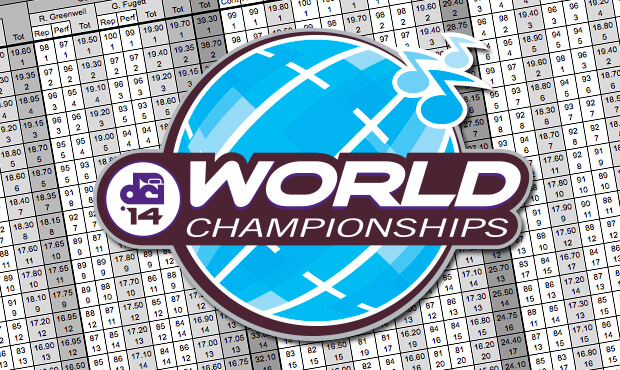 Here is a look at the scores awarded to the 25 corps that competed at the 2014 Drum Corps International World Championship Semifinals, Friday, Aug. 8.

Only twice in DCI's history, in 1992 and 2004, did as many as nine corps break 90 points at the World Championship Finals. That could easily happen again this year, as eight corps did so in Semifinals and two more corps were within a point of the milestone. There has never been as many as 10 corps at 90 points or higher at the Finals.

There are two judges for GE 1, GE 2, and Percussion, with scores from each of those pairs of judges averaged together for the total caption score. The scores of the two Effect captions are counted for full value, but each of the scores of the three Visual captions (Visual Proficiency, Visual Analysis and Color Guard) and three Music captions (Brass, Music Analysis and Percussion) are first divided in half, with each of those half scores added together for the Total Visual and Total Music scores.

The other score of extreme interest was Crossmen making it into the Finals by just a tenth over the Colts due to a one-point warm-up violation.

Blue Devils (1st, 98.950) took 1st in every caption except Percussion, in which the corps placed 3rd, just 0.10 under 2nd and 0.20 under 1st. Therefore, a caption sweep is still a possibility, just as the corps had done at the DCI Eastern Classic in Allentown just a week ago (with the highest overall score ever achieved at that show). BD scored a perfect 20 from one of the GE 1 judges and was just 0.10 away from a perfect score from the other GE 1 judge. The corps also scored a 19.90 in all three of the Visual captions; Visual Proficiency, Visual Analysis, and Color Guard.

The Cadets (2nd, 96.700) finished 2.250 behind BD in overall score and just 0.15 above Bluecoats. In Prelims, the corps was 1.125 above Bluecoats, so Bluecoats picked up 0.975 on the Cadets in one day. Cadets were 2nd in GE 2, Visual Analysis, Color Guard and Music Analysis, 3rd in Visual Proficiency and Brass, and 4th in Percussion.

Santa Clara Vanguard (4th, 95.650) won Percussion and tied for 2nd in GE 1. The corps finished 3rd in Visual Analysis, 4th in GE 2, 5th in Visual Proficiency, Color Guard and Music Analysis, and 7th in Brass, down two spots from Prelims.

Crossmen (12th, 85.450) had that full 1.00 penalty for a warm-up violation, nearly knocking the corps out of the Finals competition. They tied for 11th in GE 1, took 12th in GE 2, all three Visual captions (Visual Proficiency, Visual Analysis and Color Guard), Brass and Percussion, and 13th in Music Analysis.

Pacific Crest (20th, 78.900) was 19th in Visual Proficiency, Brass and Percussion, 20th in both GE captions and Music Analysis, and 22nd in Visual Analysis and Color Guard.

Mandarins (21st, 78.150) was 19th in Visual Analysis, Color Guard and Music Analysis, 20th in Percussion, and 21st in the remaining four captions.