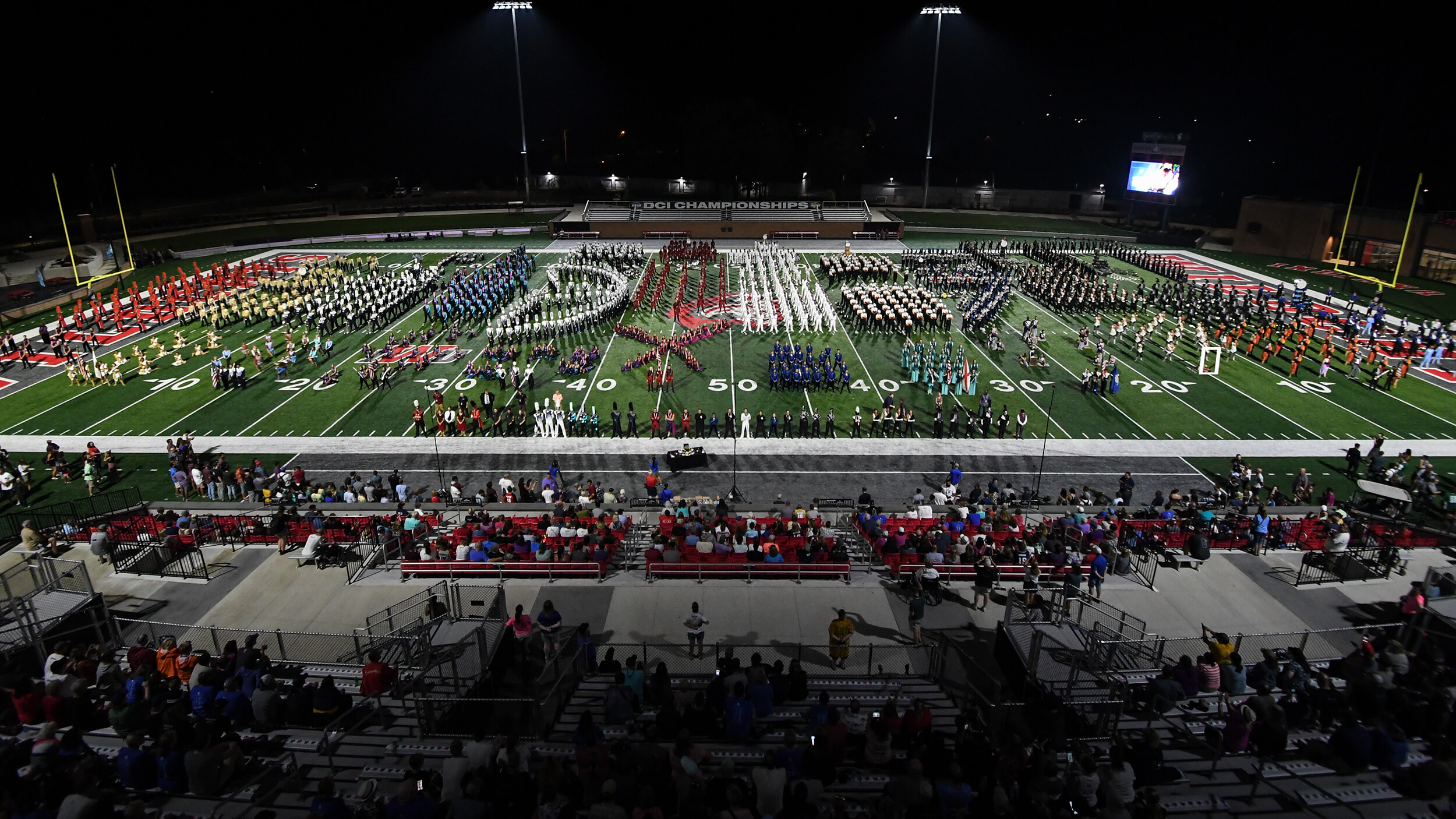 At the DCI Open Class World Championship Finals at Indiana Wesleyan University’s Wildcat Stadium in Marion, Spartans once again became a DCI World Champion for the first time since 2007.

In reading the following, please keep in mind that the scores for GE 1 (General Effect 1) and GE 2 are counted for full value, without being averaged. (Each GE caption is comprised of scores from two judges, and those two judges are averaged for each GE 1 and GE 2.) However, each of the scores of the three visual and three music captions are first divided in half, with each of those half scores added for the total visual and total music scores.

The overall Visual score is comprised of scores from three judges; Visual Proficiency, Visual Analysis, and Color Guard. The overall Music score is comprised of scores from four judges; one for Brass, two for Music Analysis, and one for Percussion. The two Music Analysis scores are averaged before being added to the overall Visual score and rounded up to the third decimal place if necessary so total scores aren’t taken out to four decimal places.

Gold (3rd-79.250) took 2nd in GE by 0.10 over Legends. Other 2nd-place finishes were earned in Visual Analysis, Color Guard, and Brass, with 3rd-place finishes in all other captions.

Louisiana Stars (4th-75.850) moved up from 5th in Prelims, taking 4th in Visual Proficiency, Color Guard, and Brass, and 5th in all other captions.

Southwind (5th-75.638) received the award for Most Improved Open Class Corps, having moved up from placing 10th in 2018. The corps took 4th in GE and Visual Analysis, 5th in Visual Proficiency, 6th in Percussion, and 7th in Color Guard, Music Analysis, and Percussion.

7th Regiment (6th-73.750) took 5th in Color Guard and Brass, 6th in Visual Proficiency and both Analysis captions, 8th in GE, and 10th in Percussion.

Guardians (7th-73.575) moved up from 8th in Prelims, taking 6th in GE and Color Guard, 7th in Visual Analysis and Brass, 8th in Visual Proficiency and Music Analysis, and 9th in Percussion.

River City Rhythm (8th-73.300) was 4th in Music Analysis, 7th in GE and Visual Proficiency, and 8th in all other captions.

Golden Empire (9th-70.650) captured 4th place in Percussion, 9th in GE and all Visual captions, and 10th in Brass and Music Analysis.

Shadow (10th-69.525) did best in the Music captions, finishing 6th in Percussion and 9th in Brass and Music Analysis. All other captions finished 10th.

Colt Cadets (11th-65.600) finished 12th in Color Guard and Music Analysis and 11th place in all other captions.

The David Kampshroer Leadership Award for Director of the Year was presented to Katherine Steinacker of The Battalion, a corps that toured regionally and ended its season in July.

Prior to the start of the competitive portion of the Finals contest, exhibition performances were presented by non-finalists Les Stentors, Heat Wave, and the International Class’ Inbhear Mor Performance Ensemble.