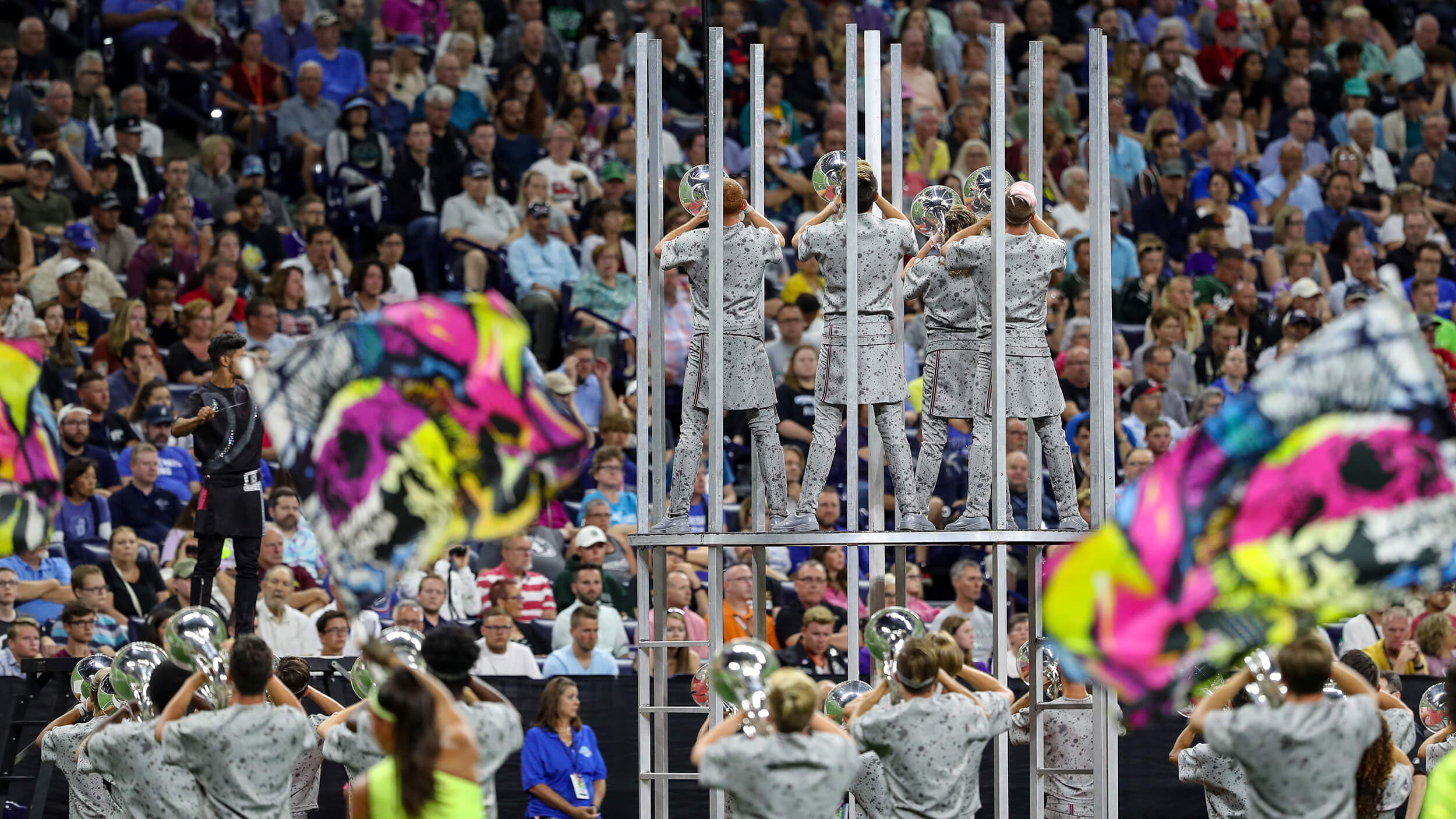 The 2019 season came down to the wire with no clear indication what corps was going to go home with the DCI Founders Trophy.
In Semifinals, Blue Devils took the lead from Bluecoats by 0.15, Santa Clara Vanguard held off a surge by Carolina Crown by only 0.30, the Cadets barely staved off being passed by Mandarins, maintaining a 0.362 edge, and Crossmen passed up Phantom Regiment to climb out of the 12th spot after the Semifinals.

When reading through the scoring recap, there are two General Effect judges for each GE 1 and GE 2, the scores of the pair of GE 1 judges averaged and added to the score for the averaged pair of GE 2 judges. The overall Visual score is comprised of judges’ scores for Visual Proficiency, Visual Analysis, and Color Guard. The overall Music score is comprised of scores from four judges; one for Brass, two for Music Analysis that are averaged together, and one for Percussion. The scores for each of those Visual of Music captions is divided in two before being added to the final score.

Blue Devils (1st place-98.325) won the gold medal and the DCI Founders Trophy by increasing the corps’ Semifinals score by 0.625, besting Bluecoats by 0.087, a bit less than one tenth. The corps’ spread over Bluecoats in Semifinals had been 0.15, which at the time seemed quite small. In Finals, the corps won Visual Proficiency and Visual Analysis, two of the three Visual captions, taking 2nd in Color Guard by 0.15 under Boston Crusaders. The corps also won the Percussion caption in Finals, just 0.05 over Santa Clara Vanguard’s score. But the other Music captions weren’t as kind, with Music Analysis finishing in 3rd and Brass in 4th, under Carolina Crown, Bluecoats, and The Cavaliers.

Bluecoats (2nd place-98.238) took the silver medal by increasing its Semifinals score by 0.688, finishing 2nd by that scant 0.087 margin. The corps won GE, 0.15 over BD. The corps placed 2nd in Visual Proficiency and Visual Analysis, but took 3rd in Color Guard. In the Music captions, Bluecoats took 2nd in Brass and Music Analysis, and placed 3rd in Percussion, tying Carolina Crown for 1st in total Music. The corps’ 0.15 advantage in GE and 0.088 in total Music over Blue Devils was more than tempered by finishing 0.325 under BD in total Visual, in which the corps scored under BD by 0.20 in both Visual Proficiency and Analysis captions, and 0.25 under in Color Guard. (Remember those individual captions are halved.) A single additional tenth in just two of those captions would have resulted in a total score 0.10 higher, which would have given the corps the trophy.

Santa Clara Vanguard (3rd place-96.600) won the bronze medal by increasing its score by 0.275 from Semifinals. Since Carolina Crown increased its Finals score a strong 1.313 over Semifinals, SCV barely held off losing to Crown by only 0.037, about one-third of a single tenth. SCV took 4th in GE, 0.10 under Crown’s 3rd place in that caption. But the corps’ major strength over Crown was a 0.40 advantage in total Visual, despite placing 4th in Visual Proficiency and Color Guard and 3rd in Visual Analysis. SCV lost to Crown in total Music by 0.263 by placing 5th in both Brass and Music Analysis to Crown’s 1st-place finishes in each of those captions, and 2nd in Percussion, besting Crown’s percussion by 0.55. So, it was that 0.40 advantage in total Visual that kept Vanguard in a medalist position.

Carolina Crown (4th place-96.563) increased its score by 1.313 over Semifinals, by far the most of any finalist corps and about twice the amount than the total score increases enjoyed by Blue Devils and Bluecoats. Crown took 3rd in GE, 0.10 over SCV. Though the corps took 3rd in Visual Proficiency, the other Visual scores of Analysis and Color Guard placed 5th and 6th, respectively, causing Crown to finish 5th in total Visual. The Music captions were far kinder despite finishing 4th in Percussion, 0.60 under Blue Devils’ Finals Percussion score. Wins in both Brass and Music Analysis contributed to the corps winning total Music.

The Cavaliers (5th place-95.400) took 5th in GE, Color Guard, and Music Analysis, and was 6th in Visual Proficiency and Percussion. 4th in Visual Analysis couldn’t help the corps break out of 6th place in total Visual, and total Music finished 5th despite a 3rd-place finish in Brass, under Crown and Bluecoats.

Boston Crusaders (6th place-94.488) won Color Guard in Finals, reversing the loss to Blue Devils in Semifinals. But the corps finished 4th in total Visual due to placing 5th in Visual Proficiency and 6th in Visual Analysis. A 6th-place finish in GE was matched by similar placements in all three of the Music captions, with Percussion rising from 8th place in Semifinals. While the corps beat Cavaliers by 0.45 in total Visual, it lost to Cavaliers by 0.575 in GE and 0.787 in total Music. As for how the corps fell so far behind Cavaliers from Semifinals, the captions don’t broadcast well how that happened, but it was just a little bit here and a little bit there that made it possible for the corps to be stronger than last year and still drop one placement.

Blue Knights (7th place-92.050) slipped 0.60 from Semifinals, taking 7th in GE, Music Analysis and Brass. Visual Proficiency and Analysis both placed 8th, and Color Guard and percussion finished 9th, resulting in the corps taking 9th in total Visual. Although Blue Stars finished two placements higher in total Visual, the spread was only 0.225 and didn’t put Blue Knights at risk of falling behind the Wisconsin corps.

Blue Stars (8th place-91.225) scored 0.075 lower than in Semifinals. GE and all Music captions placed 8th. Visual Proficiency placed 10th, but due to the other two Visual captions placing 7th, the corps finished in 7th in total Visual.

The Cadets (9th place-89.838) took 5th in Percussion and finished 8th in total Music due to placing 9th in Brass and Music Analysis. Due to a 9th place finish in Visual Proficiency and 11th place finishes in Visual Analysis and Color Guard, the corps finished 10th in total Visual, the same placement in which it finished in GE.