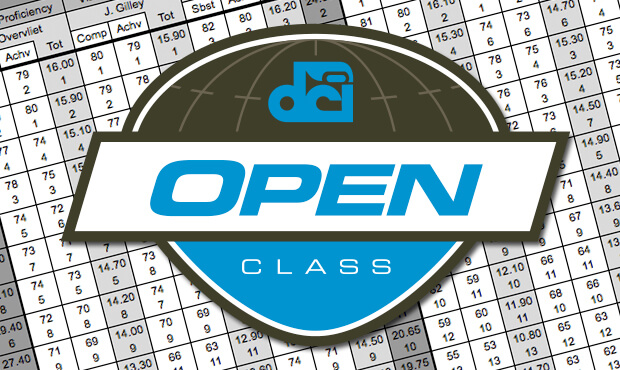 The corps once again returned to Ames Field in Michigan City, Indiana, a favorite of the Open Class directors who had voted unanimously to hold their Championship in the city.

Prior to Michigan City, Vanguard Cadets defeated Blue Devils B in the first six shows in which both corps competed. BDB got the upper hand in the next two shows and then the two corps went on different tours, not to meet again until Michigan City, where BDB won both the Prelims and Finals.

Racine Scouts, despite making it into Finals last year and falling short this year, won the award for Most Improved Corps, demonstrating how much the entire class has improved over the past year. Fellow corps directors voted Tim Rall of 7th Regiment the Open Class Director of the Year.

There were two judges for GE 1, GE 2, and Percussion, with scores from each of those pairs of judges averaged together for the total caption score. The scores of the two Effect captions are counted for full value, but each of the scores of the three Visual captions (Visual Proficiency, Visual Analysis and Color Guard) and three Music captions (Brass, Music Analysis and Percussion) are first divided in half, with each of those half scores added together for the Total Visual and Total Music scores.

There were two shifts in position from Prelims to Finals, with Genesis switching placements with Spartans to capture 3rd place and Legends passing up Music City to finish 7th.

All Open Class corps now head to Indianapolis, where they will compete head-to-head with all the World Class corps at the DCI World Championship Prelims on Thursday at Lucas Oil Stadium. The Open Class corps placing among the top 25 will have the opportunity to advance to the Semifinals on Friday.

Genesis (3rd, 77.900) placed 3rd in both GE captions, Music Analysis and Percussion, 4th in Visual Analysis, Color Guard and Brass, and 5th in Visual Proficiency. The corps' 0.875 spread over Spartans was more than accomplished through a 1.10 advantage in Total GE, defraying the loss to Spartans by 0.95 in Total Visual, with the 0.725 advantage in Total Music sealing 3rd place.

Legends (7th, 73.675) finished 5th in GE 2 and Percussion, 6th in Color Guard and Music Analysis, 7th in GE 1 and Visual Analysis, and 8th in Visual Proficiency and Brass.

Coastal Surge (11th, 65.025) took 9th in Percussion, 10th in Visual Proficiency and Brass, and 11th in the remaining five captions.