This picture is from Jeff Noble of Houston, Texas. 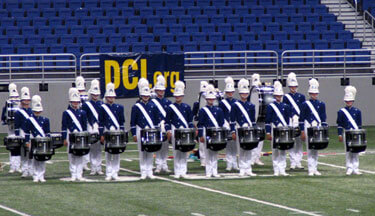 I snapped this picture at the San Antonio major event last weekend. My name is Jeff Noble, I'm a network engineer with Science Applications International Corporation in Houston, Texas. I drove to San Antonio last weekend so I could see all of the best DCI has to offer!

I have been working overseas for the United States Air Force for the better part of the last 15 years, and I have missed out on most of all drum corps activity during that time. I moved to Houston in February of 2005, and I immediately got tickets for the Houston show that year! I have gotten the DCI bug again after years away and just had to see more this year.

I never had the chance to march in a drum corps but played lead snare for the Phantom Knights marching band in Albuquerque, N.M., in the early 1980s, New Mexico State University Pride Band snare line in the 1980s, and I have been a percussion instructor part time for DOD schools overseas ever since. I'm so glad to be back in the states and to enjoy drum corps and all it has become!