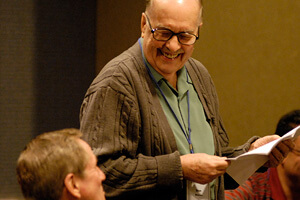 Don Warren
Setting the theme for Drum Corps International's 40th anniversary season, representatives of DCI's voting member corps were treated to an after-dinner history lesson Thursday, Jan. 19 from Cavaliers founder Don Warren. Starting the Cavaliers as a 20-year-old in 1948, Warren was instrumental in the founding of Drum Corps International in 1972, when 13 corps organized to run their own competitive circuit apart from the American Legion and VFW organizations. Warren began his talk with what has now become an infamous story about his conversation with Troopers Founder Jim Jones in a Delevan, Wis., stadium washroom that planted the seed for DCI's genesis. Learn more about DCI's founding in the book "DCI the First Decade"