Andy Dittrich, who wrote a series of columns for us in 2004 and into last summer, will be exploring how drum corps folks stay focused and conditioned in the off-season in a new series of articles. The following responses to my first inquiries on drum corps off-season are from Chris Ham, Southwind snare drummer in 2005, and a rook-out. He is also a member of the University of Illinois drum line. 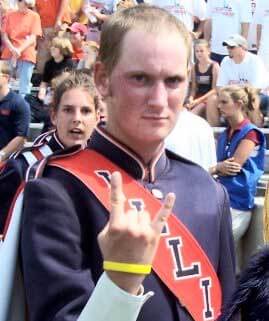 Chris Ham
What techniques do you find to be best effective in maintaining personal musical growth in the off-season? Surrounding myself with other people from the drumming community usually gets me motivated to start drumming again. When I do drum, I tend to play things from the show. I also try to remember what challenges were presented to me during the summer that I didn't have time during rehearsal to correct and try to work on those things. Did you perform in high school or college marching bands during your off-seasons? Did you find that performing with these groups helped you in maintaining or building on the things you learned and perfected during the summer? Why? I perform with the Marching Illini drum line at the University of Illinois during the "off-season." Just drumming with some sort of group every day helps you maintain what you've learned. It might not be at the same level, but you always find yourself dreaming back to those summer days on the field when you're out there in rehearsal with your drum on -- and that in itself is motivation to maintain and build. Did you, or do you currently, teach high school or college marching band during your off-seasons? Do you find that instructing or writing helps you maintain or build on the things you have learned and perfected during the summer? Why? I have taught different high school lines and individuals during the off-season. I find that this is one of the optimal places to maintain my knowledge, because, in my opinion, you learn the most when you teach.
Do you recommend any specific exercises for drum corps veterans during the off-season? As far as drumming goes, I would recommend going back to the basics. Redefine your hands from what you've learned from the summer. Break all of those bad habits that you may have unfortunately obtained during the summer and come to winter camps a new, improved drummer. Do you believe that drum corps should encompass a large part of a veteran's life during the off-season? What do you think about winter camps? What do you think about preparation between winter camps? Absolutely. I know that when I got back, I didn't want to see, hear, or smell anything about drum corps, but a week later, I couldn't stop thinking about all of the great times I had over the summer. It's a part of your life, and you shouldn't deny its existence. You may annoy your friends to no end with incessant talk about it, but it's a part of you, and to some degree, it defines who you are. It doesn't necessarily have to encompass all of your time, taking away from homework, studying, etc., but it should be in your thoughts, and for most of us, I know it is in our actions from day to day.
Chris has some interesting thoughts on a drum corps off-season. The most interesting part, for me, as a drummer, is his response to the question about specific exercises to use during the dead period of drum corps. I completely agree with him, that it is important to take time to process all of the information that you have received in a summer, that you did not have time to process while being so busy. This is a perfect opportunity, no matter what instrument you play or what equipment you handle, to process the things you've learned, and return to drum corps an even better performer. Chris also points out that drum corps defines us. Some background on Chris for you: Chris kept trying out for corps and kept getting cut, but he kept showing up, and he made Southwind on his second try in 2005. Chris has gone through a redefinition, and drum corps, he now understands, is an important part of his life, and the lives of all who have participated in it, even in the off-season. What to do during winter vacation