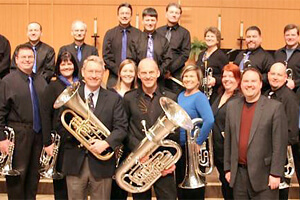 Minne-Brass with guest soloist Oystein Baadsvik
Minne-Brass, a small ensemble of the all-age Minnesota Brass Drum and Bugle Corps of St. Paul, Minn., will live stream a pre-recorded concert today, Thursday, April 25, at 10 p.m. ET. Recorded on March 10, in Woodbury, Minn., the concert featured tubist Oystein Baadsvik as guest soloist. An award-winning instrumentalist, Baadsvik has performed around the world with many groups including the Oslo, Bergen and Warsaw Philharmonic Orchestras, the Taipei National Symphony Orchestra, the Singapore Philharmonic and the Orchestra Victoria of Melbourne. Also featured at the concert was one of the world's top euphonium soloists, Dave Werden, who has played with the U.S. Coast Guard Band for 26 years. Minnesota Brass is scheduled to perform at a number of 2013 Drum Corps International Tour events, including June 30 in Rochester, Minn., July 1 in Mankato, Minn. and July 13 in Minneapolis. Keep an eye out for Minne-Brass at the 2013 DCI World Championships in Indianapolis.

Live playback of the Minne-Brass concert will begin April 25, at 10 p.m. ET in the player below.