Fifty-six members of Revolution's percussion ensemble, winter guard and drum and bugle corps formed together to perform during the pre-game activities at the U.S. Army All-American Bowl on Jan. 6, at the Alamodome in San Antonio, Texas. Crowds reached 32,000 at the game touted as the premier prep football event in the nation. Revolution came across this performance opportunity after being contacted by the U.S. Army who was looking to expand the pre-game activities of the nationally televised game. Behind-the-scenes preparations for the corps began in October to determine logistics. The organization then took time during winter rehearsal and audition camps to put the performance together before a full practice just prior to the event. 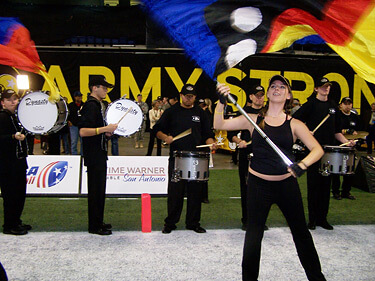 Revolution members perform for the Army All-American Bowl on Jan. 6 in the Alamodome, site of the annual summertime DCI Southwestern Championship.
"We are very pleased with the way the day progressed and the members really enjoyed the opportunity to showcase their talents," said Johnny Rodriguez, President of Revolution Youth in Performing Arts (YPA). "We received many compliments not only from our Army contact but from producers and show coordinators as well." He added, "The performance was a great opportunity to tie back into our local community and launch another performance arm for the Revolution YPA family. We will be doing more public performances of this nature and play a bigger role in the community in the future." www.revolutionypa.org