DCI broadcast vet Steve Rondinaro, who worked with DCI broadcast commentator Curt Gowdy many times through the years (1989-1993), wrote this tribute to Gowdy, who passed away earlier today at age 86. My name has been mangled many times and many ways by many people over the years. No one did it more thoroughly than Curt Gowdy during our Drum Corps International Championship broadcasts together on PBS. It has become the stuff of legend within the broadcast crew. I was "Sam," I was "Steve Ronindaredo," and heaven knows what else. I didn't mind in the least. 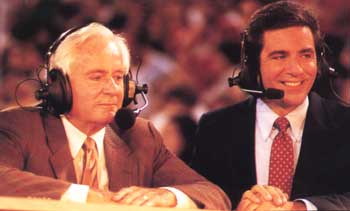 I was thrilled to work with Curt Gowdy. The man did more in his broadcasting career than I could ever hope to do. He was already a legend in my profession when we sat down together to do drum corps TV. Eight Super Bowls, 16 World Series, seven Olympics. The first time our guys opened his mike I will honestly tell you I got goosebumps. "Wow, I'm working with Curt Gowdy and we're doing drum corps!" Curt knew next to nothing about the drum and bugle corps activity going in. Mind you he was already pushing 70 when we first teamed up in 1989. But Curt really came to enjoy watching drum corps. He admittedly had trouble keeping some of the corps straight, but that was my job. I usually had the responsibility of driving Curt around and keeping him company while the production guys did their thing. That was fine with me. The stories I heard those nights in the hotel bar. Especially the baseball stories! Great stuff. Classic. Curt had me scared to death of Ted Williams before I interviewed him. I told that to Ted when I met him and we immediately bonded. Ted and Curt had a ton of respect for each other and I, in a very small way, became part of that triangle. I have a baseball that Curt signed for me but one of my proudest possessions in my office at our TV station is a page from the 1990 DCI program. There's a picture of Curt and me (above) and an article about the upcoming PBS telecast. Curt signed it for me with the words: "To Steve, A real pro and what a pleasure to work with. Curt Gowdy." Right back at you Curt. Your pal,
Sam