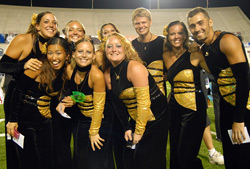 Age-out members of the Colts color guard.
Serving as the unofficial start to the 2009 Drum Corps International season, many corps across the country are already underway with or preparing to audition the newest students who will step onto the field next summer as members of world's most elite and exclusive marching music ensembles. This coming weekend alone, 12 corps will be holding audition workshops for prospective members across the United States. Leaving plenty of big shoes to fill for those incoming rookies, hundreds of corps members finished their final season of eligibility in 2008 "aging out" after the DCI World Championships in Bloomington, Ind. All of those members were recognized on the field during a special ceremony at the conclusion of the World Class Semifinals on Aug. 8. View a photo gallery from the 2008 age-out ceremony. The following clip played on the video board at Memorial Stadium that night as a tribute to the accomplishments of the age-out class of 2008 and their many combined years of remarkable service to their respective corps. Learn more about joining a 2009 Drum Corps International corps. Photos by Johnny Gilbert. Video by Corey Davis.